Dwarfing past monopolies, the rapid growth of ‘Big Tech’ alarms both left and right

The power of three firms – Google, Facebook and Amazon – has grown larger than “any other monopolies we’ve dealt with in the past century,” raising major concerns on all sides of the political spectrum.

Google rules about 90 percent of the Internet search market in the United States and Europe. Facebook and Google account for 60 percent of all digital ad revenues and 90 percent of new ad growth in the U.S. 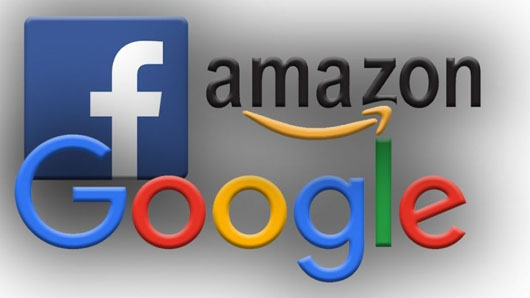 Amazon garners nearly half of U.S. online sales and is expanding into new sectors.

“We have to be incredibly concerned about the power of Facebook, Google and Amazon,” , said Barry Lynn, executive director of the Open Markets Institute.

“They have their hands on the flow of news, the flow of books and they are manipulating that flow in a conscious way to promote their interests,” said Lynn, who launched the Open Markets Institute last month after his team was ousted from the Google-funded New America Foundation, the Daily Mail reported on Sept. 23.

Lawmakers and industry analysts have begun a conversation about breaking up or regulating the biggest technology companies, though they admit immediate action appears unlikely.

The recently formed “New Center” political alliance that includes leaders from the traditional right and left has placed “challenging big tech” on its agenda, the Daily Mail report said.

New Center was co-founded by Bill Galston, a former White House adviser to Bill Clinton. Galston said that the tech monopolies are hurting wages, entrepreneurship and could be distorting the political landscape.

“The big tech firms have almost unlimited funds they can throw into lobbying, and they have been ramping this up steeply,” Galston said. “Is that a good thing for democracy?”

Former White House chief strategist Steve Bannon said he was spearheading an effort within the Trump administration to turn Facebook and Google into “public utilities.”

Bannon’s view points to a new frontier in monopoly regulation, Fortune magazine reported. “While Google and Facebook don’t control a network of wires, their dominance creates other barriers, including so-called ‘network effects,’ that make it hard for new entrants to compete.”

Federal Trade Commission chief Maureen Ohlhausen, who would lead any U.S. antitrust action, said any efforts to break up tech firms would be remote.

“Given the clear consumer benefits of technology-driven innovation, I am concerned about the push to adopt an approach that will disregard consumer benefits in the pursuit of other perhaps even conflicting goals,” Ohlhausen said in a speech at Georgetown University.

Ed Black, president of the Computer & Communications Industry Association, which represents Google, Facebook and Microsoft, said breaking up the tech giants could have a “chilling effect on innovation.”

The European Union slapped Google with a $2.7 billion antitrust fine last month for giving its own services preferential treatment in search results.