The dominance in the digital advertising market of the two social media Goliaths is only getting larger as the role played by independent, privately-owned media voices fade into near oblivion.

The so-called “duopoly” enjoyed by Google and Facebook will account for 63.1 percent of digital advertising investment in 2017, outpacing previous predictions as former independent news media outlets drop out of the rankings, according to eMarketer’s latest digital ad spending forecast. 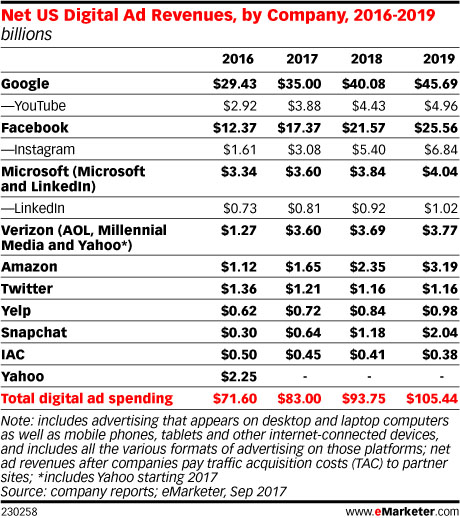 “Google and Facebook have positioned themselves at the front of this demand curve by being the ad publishers with some of the best-in-class targeting abilities in the digital ad market. With Facebook being able to provide targeting based upon consumer interests and Google capitalizing on where those consumers have been through searches, both companies ensure their lead among digital ad publishers.”

Previously, eMarketer predicted that the duo’s total would reach in 2017 would be 60.4 percent.

According to eMarketer, Google (including YouTube) this year will generate $35 billion in total digital ad dollars in the U.S., an increase of 18.9 percent over 2016. The increase will give Google a 42.2 percent share of the U.S. digital ad market.

“In 2017, for the first time, mobile will represent more than half (54 percent) of Google’s total U.S. ad revenue for the year, with ads served to smartphones and tablets up 28.6 percent year over year to $18.90 billion,” eMarketer reported.

Facebook will make $15.28 billion in mobile ad revenues this year, equal to 88 percent of the company’s total ad business and enough to push Facebook’s share of the U.S. mobile ad market to 26.8 percent.

Meanwhile, Twitter’s total U.S. ad revenue will drop by 10.8 percent this year to $1.21 billion. Its share of the U.S. digital ad market will fall to 1.5 percent, down from 1.9 percent last year.