Donald J Trump corrects the record since the MSM won’t 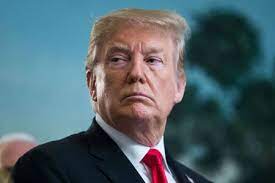 My long-term accounting firm didn’t leave me for any other reason than they were harassed, abused, and frightened by DA’s and AG’s that for years have been threatening them with indictment and ruination. They were “broken” by these Radical Left racist prosecutors, and couldn’t take it anymore. Even the letter they sent stated, “Mazars performed its work in accordance with professional standards. A subsequent review of those work papers confirms this.” Further, their disclaimer clause in the financial statements has for years stated much the same.

My company is incredible with some of the greatest assets in the world and very low debt. Also, we’re loaded with cash. The Fake News Media hates talking about it!

So much fake news, so few alternatives. Trump separately weighed in on other “news” that missed or buried his side of the story:

The National Archives did not “find” anything, they were given, upon request, Presidential Records in an ordinary and routine process to ensure the preservation of my legacy and in accordance with the Presidential Records Act. If this was anyone but “Trump,” there would be no story here. Instead, the Democrats are in search of their next Scam. The Russia, Russia, Russia Hoax turned out to be a Democrat inspired fake story to help Crooked Hillary Clinton.

Impeachment Hoax #1, Impeachment Hoax #2, and so much more, has all been a Hoax. The Fake News is making it seem like me, as the President of the United States, was working in a filing room. No, I was busy destroying ISIS, building the greatest economy America had ever seen, brokering Peace deals, making sure Russia didn’t attack Ukraine, making sure China didn’t take over Taiwan, making sure there was no inflation, creating an energy independent country, rebuilding our military and law enforcement, saving our Second Amendment, protecting our Border, and cutting taxes.

Now, Russia is invading Ukraine, our economy is being destroyed, our Border is once again overrun, and the mandate continues. Instead of focusing on America, the media just wants to talk about their plan to “get” Trump. The people won’t stand for it any longer!