Did substance or spin prevail on Jan. 8? Limbaugh awards night to President Trump

President Donald Trump “was superb” in his address to the nation on Jan. 8 while House Speaker Nancy Pelosi and Senate Minority Leader Chuck Schumer looked like “morticians” in their response, radio host Rush Limbaugh said.

“He was compassionate. He was on point. He was factually correct. And everything the Democrats and the media complex had set up to blow Trump out of the water bombed and blew up in their faces because there wasn’t a single thing Trump got wrong or made up or lied about that they could make hay about,” Limbaugh said of the president. 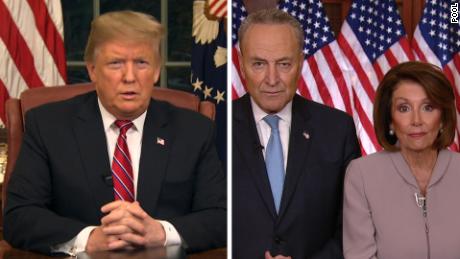 Of Pelosi and Schumer, Limbaugh said: “This is what you see when you walk into the funeral home to make arrangements to bury a dead family member. … Schumer looks grim. And I’ll tell you why Schumer looks grim. It’s because they wrote their response long before Trump wrote his speech. They didn’t even really challenge a single thing Trump said in his speech because they couldn’t.”

Limbaugh then referenced a CBS “fact-check” concerning the percentage of women who are sexually assaulted during their journeys to illegally sneak into the U.S.

“Trump said in his speech last night that one-third of women making the trek in these caravans ends up being raped,” the radio host said. “Are you ready for the CBS fact-check? The CBS fact-check said, ‘Oh, no. Trump’s wrong. It’s 60 to 80 percent of women who are raped!’ They made it look even worse than Trump did! And now CBS, you can’t find that fact-check on their website. They’ve pulled it.”

Schumer said “We don’t govern by temper tantrum. No president should pound the table and demand he gets his way or else the government shuts down, hurting millions of Americans who are treated as leverage.”

Pelosi asserted: “The fact is: President Trump has chosen to hold hostage critical services for the health, safety, and well-being of the American people and withhold the paychecks of 800,000 innocent workers across the nation – many of them veterans. He promised to keep government shutdown for ‘months or years’ – no matter whom it hurts. That’s just plain wrong.”

Limbaugh said the Schumer-Pelosi televised response was “stiff and robotic.”

“They looked nervous,” he said. “That is how they appeared in their response to President Trump’s national address on the wall. To me, they looked like a couple of undertakers. They looked like the kind of people you’d run into when you walk in the funeral home to pick out a casket.”

On Jan. 9, Trump walked out of a White House meeting with Schumer and Pelosi after the Democrats made it clear they were not willing to budge on their denial of funding for a border wall.

“Just left a meeting with Chuck and Nancy, a total waste of time,” Trump tweeted.

Trump asked Pelosi if she would bring up a vote for border security within 30 days if he signed a bill to re-open the government.

According to Trump, Pelosi said, “No.”

“I said bye-bye, nothing else works!” Trump tweeted.

Vice President Mike Pence noted that Democrats remained unwilling to negotiate a deal with the president and confirmed Trump’s account of the meeting.

“When she said no, the president said, ‘goodbye,’ ” Pence said.

Reporters confirmed after the meeting that Trump literally said, “Bye, Bye,” before walking out of the room.

Pence urged Americans to call their representatives to get them back to the table. “The door here at the White House is wide open,” he said.

Republicans confirmed the account after the meeting, noting that Schumer and Pelosi refused to commit to any funding for a wall within 30 days, even if the government was re-opened.