Did Joe Biden give the ‘green-light’ for Putin to invade Ukraine?

During a Wednesday press conference, his first in ten months, Joe Biden responded to a question about Russian strongman Vladimir Putin’s intentions in Ukraine, saying: “My guess is he will move in, he has to do something.” 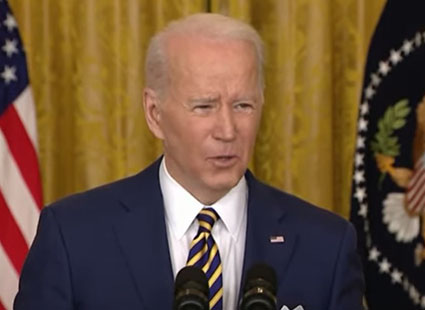 Writing for Breitbart, political analyst James Pinkerton noted that the fear was that Biden “would say something stupid — and that’s exactly what he did.”

“It’s no wonder that Biden’s White House handlers have been keeping him on a short leash,” Pinkerton wrote. “To be sure, Biden indicated that he was against Russia attacking Ukraine, and yet at the same time, over the course of a two-hour session with the press — he obviously enjoys being off the leash” — Biden telegraphed to Putin that he was willing to split hairs, that he might not call a spade a spade.”

Biden said: “It’s one thing if it’s a minor incursion and we end up having to fight about what to do and not do.”

In other words, Pinkerton wrote, “maybe an incursion is okay, but not an invasion. Got that?”

Zelensky publicly pushed back on Biden’s comments that a “minor incursion” by Russia into Ukraine would prompt a lesser response than a full-scale invasion.

Dmytro Kuleba, Ukraine’s foreign minister, told the Wall Street Journal: “Speaking of minor and full incursions or full invasion, you cannot be half-aggressive. You’re either aggressive or you’re not aggressive. We should not give Putin the slightest chance to play with quasi-aggression or small incursion operations,” he added. “This aggression was there since 2014. This is the fact.”

Psaki said Biden “has been clear with the Russian President: If any Russian military forces move across the Ukrainian border, that’s a renewed invasion, and it will be met with a swift, severe, and united response from the United States and our allies.”

Team Biden “can and will issue more clarifications, and yet the plain fact is that they won’t be able to clear up the mush in Biden’s head,” Pinkerton wrote. “And so the world waits in wonder: What will Putin and his Russian armed forces do next? And how will Biden react? (And yes, Congress, as an equal branch of government, should step in with some clear guidance as to what the U.S. should and should not do in the event of war along the Ukrainian frontier.)”

Pinkerton added that it was difficult to think of “an exact parallel to what just happened with Biden — to a time when an American president seemed almost to invite an attack. Without a doubt, many of Biden’s actions are unparalleled.”

There is an “imperfect parallel,” Pinkerton concluded, “that does not bode well…” Take for example, he noted, the starting of the Korean War:

Back in January 1950, Secretary of State Dean Acheson outlined the U.S. defense perimeter in East Asia and excluded South Korea. Six months later, North Korea attacked South Korea. The U.S. intervened after all, and over the next three years of fighting, American armed forces suffered 33,686 deaths. It’s widely believed that had the U.S. been more clear about what it would do, about its willingness to defend South Korea, the North Koreans would never have attacked.

In other words, the whole Korean War was based on a misunderstanding. So we can see: Clarity can be a good deterrent and can save a lot of lives.

This is how nations stumble into wars.

Did Joe Biden give the ‘green-light’ for Putin to invade Ukraine? added by Editor Two on January 20, 2022
View all posts by Editor Two →