DHS source: ‘We have been advised not to speak’ to media about border crisis

Team Biden has instructed Department of Homeland Security (DHS) personnel not to speak to the media about the mounting crisis at the U.S. southern border. 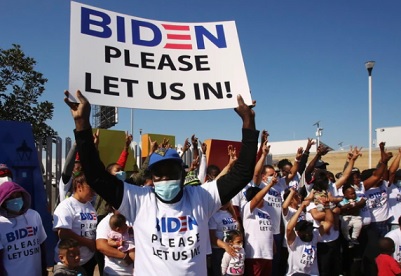 An official with knowledge of the restrictions told Breitbart News: “The situation with media relations now is night and day compared to the last administration. We have been advised not to speak on immigration issues at the border and to rely on DHS’s Office of Public Affairs and the White House Press Office to handle messaging.”

The Biden team’s order to DHS personnel “is designed to prevent senior leaders from shedding light on the immigration situation that currently plagues the administration,” Randy Clark is a 32-year veteran of the Border Patrol, wrote for Breitbart News on March 7.

Members of the press were not allowed to be present during the delegation’s visit to Border Patrol stations and a Health and a Human Services detention facility where unaccompanied minors are held in “cages.”

Several lawmakers, including some Democrats, have said that the immigration orders Joe Biden’s team put in place almost immediately after the Jan. 20 inauguration have led to a massive influx of immigrants flooding the border.

Texas Democrat Rep. Henry Cuellar said in a recent Fox News interview: “I can tell you this, those numbers of people that are being released, they’re purposely withholding that information.”

“I now know that they’re bringing people from McAllen over to Laredo, processing them in Laredo, and they’re going to release them in my community,” Cuellar said. “I’ve seen this before, don’t let the local communities know what you’re doing, where they’re starting to bring people in from the valley, process them in Laredo, release them at a bus station. And, again, I’ve seen this before in the past.”

The Biden team has also allowed some of the illegals who have tested positive for coronavirus to travel from the border to destinations inside the U.S.

Republicans say that Joe Biden has created a self-inflicted border crisis by slashing Trump-era policies and incentivizing migrants to make the journey north by signaling the border is open.

The Biden administration has ended policies like the Migrant Protection Protocols (MPP) which kept migrants south of the border while waiting for their hearings, as well as asylum agreements with Northern Triangle countries. It has also narrowed Immigration and Customs Enforcement (ICE) priorities for arrests and deportations. Meanwhile, the White House has proposed a sweeping immigration bill that will grant a pathway to citizenship for millions of illegals.

DHS source: ‘We have been advised not to speak’ to media about border crisis, illegals, immigration, U.S.-Mexico border, WorldTribune.com