Big Tech companies will face severe consequences if they violate the privacy of Florida’s residents and attempt to interfere in citizens’ access to candidates during elections, Gov. Ron DeSantis said on Tuesday.

During an address in which he detailed new legislation targeting Big Tech, DeSantis, a Republican, slammed platforms such as Twitter, Facebook and Amazon for manipulating news and censoring certain individuals, The Epoch Times reported. 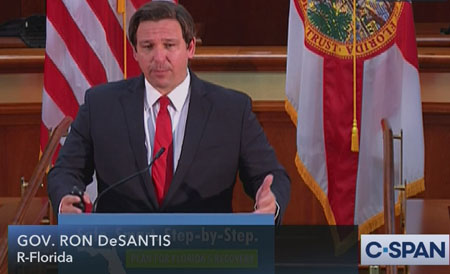 The Florida legislature’s new measure mandates that technology companies which de-platform a candidate during an election will face a daily fine of $100,000 until the candidate’s access to the platform is restored.

If a technology company promotes a candidate for office against another, the value of that free promotion must be recorded as a political campaign contribution enforced by the Florida Elections Commission.

The bill will also empower the Florida Attorney General to bring action against Big Tech companies under Florida’s Unfair and Deceptive Trade Practices Act if they violate the new policies laid out in the bill.

Tech companies would have to give users advance notice of a rule change and before shutting down an account and apply the rule consistently.

“If a technology company uses their content and user-related algorithms to suppress or prioritize the access of any content related to a political candidate or cause on the ballot, that company will also face daily fines,” DeSantis added.

DeSantis alluded to Big Tech’s “moderating” news that was unfavorable to Joe Biden, banning high-profile conservatives, including President Donald Trump, from Twitter and Facebook, and the removal of the Parler social media platform from Amazon’s servers.

“When 2.8 million Americans chose to download the application Parler and share information with friends, family, and colleagues, what was the result of that? Canceled by Amazon, Google, and Apple,” said DeSantis.

Florida’s House Speaker Chris Sprowls said, “With our proposal, we are going to bring into the sunshine what I call the five families of darkness: Facebook, Twitter, Google, Amazon, and Apple,” adding, “These actors won’t go unchecked here in Florida anymore.”

“They have access to private information and the ability to exercise control over individuals’ free speech,” Sprowls said. “We’re pushing the barriers to finally call out their convoluted and inconsistent standards for censoring, banning, and de-platforming.”