DeSantis on Biden secretly shipping illegals to Florida: ‘I will send them to Delaware’

“These are done mostly in the middle of the night,” he said. “And it’s clandestine. And we really have no say in it.” 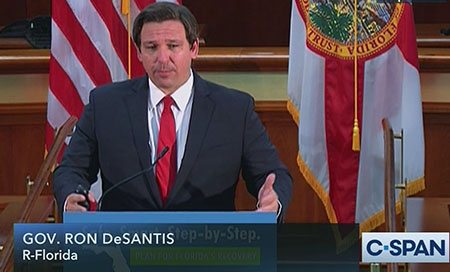 Florida, however, will ultimately have a say in what happens to the illegals after they are transported into the state, the governor said.

“We’ll provide buses,” DeSantis said in a Thursday press briefing. “I will send them to Delaware and do that.”

If Joe Biden is not going to support the U.S. southern border being secured, “then he should be able to have everyone there” in his home state of Delaware, DeSantis said. “So, we will do whatever we can in that regard. And we are absolutely going to do everything we can.”

DeSantis made his comments following reports that an adult illegal immigrant came into the United States while posing as a minor, and, after arriving in Florida, allegedly murdered a man who had four children.

Florida is looking at ways to penalize contractors who fly the illegals into the state, DeSantis said.

“We should be able to have consequences for those contractors, and your ability to do business in Florida should absolutely be curtailed based on whether or not you’re bringing problems or not bringing problems,” he said.

DeSantis slammed Team Biden’s plan to pay significant sums to illegal immigrants who were allegedly separated at the border from their families during the Trump administration.

Biden “has said that basically, they want to even pay reparations to people who came illegally, just think about that,” DeSantis said. “You as an American, you get higher gas prices, you get higher grocery bills, you get told basically, to just grin and bear it, someone breaks the law, comes illegally, and they’re going to cut him a check for hundreds of thousands of dollars. That is just unbelievable. But that’s what we’re dealing with.”

Biden border crisis, DeSantis on Biden shipping illegals to Florida: ‘I will send them to Delaware’, Gov. Ron DeSantis, WorldTribune.com

DeSantis on Biden secretly shipping illegals to Florida: ‘I will send them to Delaware’ added by Editor Two on November 12, 2021
View all posts by Editor Two →