Demise of the West: Waiting for Act II, but the stage is empty

It would be a mistake to think that the Western economic crisis is being managed toward a successful conclusion; that perhaps it can escape from disaster.

Rather, most Western societies have moved closer to the brink of economic — and therefore political and social — instability because they have forgotten the fundamentals of social reality which determine the value of currencies, property, and products. 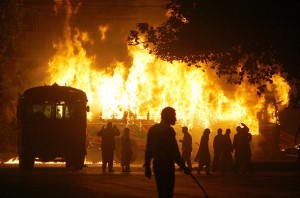 To be more precise, elected political leaders almost always choose to place short-term stability — frequent, stop-gap tactical fixes — ahead of structural solutions. Perhaps, indeed, even if they understood and desired enduring structural renovation, the complex mass of societies and now-ingrained political practices (what we call Western democracy) could not be persuaded to accept painful corrective moves by any measure short of societal collapse or conflict.

It is inconceivable that economic recovery can occur in the absence of a recovery of productivity. Despite this, Western economies have not only failed to stimulate real productive growth, they have consistently discouraged investment in production. Western governments have also consistently, in recent decades, discouraged the development of any incentives for their populations to become actively engaged through individual initiative and freedom to act in the fight for economic recovery. Rather, at this juncture in Western “democracy”, all governmental efforts are directed at two principal endeavors:

Nowhere is this more evident than in Western Europe, and particularly Continental Western Europe; in the eurozone bloc of the European Union (EU). There, only marginally ahead of activities in other Western “democracies”, the governments have become the source of all power.

The “electorates” — having had most of their real power eroded — have become subject to the governments. Thus has ended the concept of power originating with, and flowing from, the people.

Elections have become merely part of the circus process. In Italy, indeed, there is draconian governmental interference in all aspects of life as State officials root out funds from whatever source they can subject to their pressures, while the government itself lacks even the figment of electoral representation. It evolved, to be sure, from an earlier electoral process, but — as with the evolution of nazi power in Germany between the world wars, and the rise of fascist authority in Italy during the same period — it has now assumed a life of its own. It is a non-elected, appointed government of technocrats, and yet no one has called this coup d’etat by its real name. The situation in France is little better.

But it is true in almost every Western “democracy” that the State has become — in recent years — embodied not with the citizenry, but with the bureaucracy and political figures. We can no longer call this democracy.

In the United States, the present administration has moved to even dispense with the elected Congress for the implementation of most of its tools of authority. “Rules”, all with the power to impose punishment (fines or prison), have been implemented in far greater number than any legislatively-approved laws. Is this representative government?

As noted, governments have sustained the ability to broaden their size and power by offering bribes — “entitlements” — to the populace. But what happens when productivity has declined to the point where trust evaporates in the currencies? Where we see situations such as those which have arisen constantly in the past century or more in Germany, Argentina, Zimbabwe, and in varying degrees elsewhere? When no amount of printed currency can satisfy the lust for trust?

When productivity in true underlying sectors such as food, energy, and manufactures evaporates, what then underpins the value of the currency? Property values? Consumer demand? And when the predominant supply of these essentials comes from territories outside the control of the state — in other words, when it is “outsourced” — why should supplier states accept currency in payment when that currency lacks any underpinning?

This is not to underestimate the power of market consumption as a driver in economic viability. But the desires of a market cannot sustain a total economic or social-political model on their own.

This, indeed, we saw in the example of Eritrea creating its new currency, the nakfa, following independence from Ethiopia, and then demanding that this currency be accepted by Ethiopian coffee growers from Eritrean traders. To the Ethiopian suppliers, the nakfa was merely a piece of paper with which they could do nothing. They could not use it to buy anything for their own needs; they could not use it as a trading currency within Ethiopia. So the value of a currency lies in its acceptability as a trading instrument, and this “value” is a product of trust. As with the nakfa, the U.S. dollar, or the euro, are mere pieces of paper with numbers on them unless they represent trust.

What we are seeing, then, is the erosion of trust, and value, in Western economies as productivity declines. Yes, for a period, a totally abstract circular process can exist with a government printing money and paying government employees, and these employees can spend the money on (mainly) imported products and foods, but only for as long as there is a perceived value, or trust, in that currency.

The question, then, is at what point trust in value erodes? We have already seen that trust erode in the value of, for example, U.S. real estate. Value perceptions of real estate elsewhere around the world are also teetering on the brink of decline, as, indeed, they are in the values of various currencies.

All of this would seem to be fairly obvious. And yet what we see are ongoing schemes to create new forms of taxation, rather than new forms of production and productive employment. Western economies, happily “post-industrial” in their self-perception, have not only become dominated by government but also by the vast array of “service industries” which are necessary to enable ordinary lives to be sustained: the army of people whose sole task it is to mediate in legal and accounting matters so that citizens can avoid being in default of laws and rules imposed by government.

We have forgotten that societies created government in order to facilitate the order and safety of society, not the other way around. When societies have become servants of government they are, in historical terms, the subjects of tyrannies, dictators, or autocrats. It is true that, for the moment, Western populations have accepted without demur the reality that they have moved from being the source of power and legitimacy to being the subject and vassal of government.

Where we go from here is of the utmost importance. Failure to reduce the zealous power of government, and its growing consumption — and distribution as “entitlements”, or bribes — will result in hollowed economies. Already, gross domestic product (GDP) accounting standards are absolutely artificial. So, absent approaches which rapidly stimulate real investment in productivity, and the creation of balanced economies insulated to a degree from external manipulation of currency trust, we will see Western currencies becoming increasingly volatile in the public eye.

Would anyone willingly, for example, acquire Greek drachma should Greece find itself in the position where it would have to reintroduce a national currency after leaving the eurozone? These are factors with far-reaching overtones for the stability of societies. Already, investors and people are fleeing from Greece, Italy, Spain, Ireland, France, and so on. Yet we see no economic or fiscal initiatives from the governments of these states — or from the EU itself — which move to correct these trends.

What is perhaps more insidious is the fact that the “electorates” of all Western nations have allowed themselves to become addicted to the “entitlements” of high salaries, low working hours, significant “rights” and benefits, and the like, and will themselves make no sacrifices to rebuild either their nations or their own pride. And so, governments are also held hostage by the addicts they created. They see little option but to sustain the flow of bread and circuses.

Where will it end?

We are beginning to see the end merely of Act One of the drama.

Act Two will see recession fall further into economic and social depression, but with “much sound and fury” — smoke and mirrors — obfuscating the reality of declining real wealth. Underlying this, there will be more population movement; more flight of people in search of opportunity and work; people who know that despite the rhetoric of improved employment numbers and economic growth there is a reality of bleeding unemployment and hardship. There will be a flurry of inflationary monetary transfers by governmental and international bodies — economic “bailouts” — which cannot be sustained indefinitely. They are temporary fixes.

We have seen such hollowing out of economies lead before this to war. Our laboratory example of Eritrea and its comic opera nakfa — and its failure to be accepted — lead to the Eritrea-Ethiopia war. Of course, it is never a simple or straightforward process. But we can see decline leading to despair leading to a range of unthinkable options, including the rise of urban militancy — political correctness beyond rationality — and emotionally driven political responses.

We’ve only just begun. But it is as though we have a theater filled with its audience, but no stars are visible on the stage to take the heroic roles.

Demise of the West: Waiting for Act II, but the stage is empty added by Editor One on June 19, 2012
View all posts by Editor One →