Even as judges have blocked Joe Biden’s vaccine mandate for businesses with more than 100 employees and health care workers, Defense Secretary Lloyd Austin is moving full throttle on getting shots in the arms of U.S. military personnel.

In a memo signed on Tuesday, Austin ordered all National Guard and Reserve members to get the Covid jab or be barred from training and from being paid. 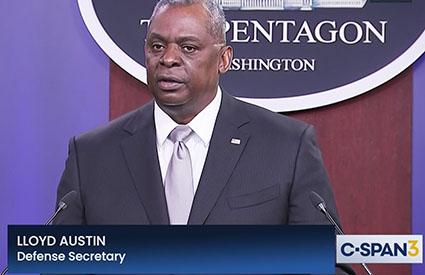 “No credit or excused absence shall be afforded to members who do not participate in drills, training, or other duty due to failure to be fully vaccinated against COVID-19,” Austin wrote in a memo to military service secretaries and other leaders.

“It is irresponsible for the federal government to place mandatory vaccine obligations on Oklahoma national guardsmen which could potentially limit the number of individuals that I can call upon to assist the state during an emergency,” Stitt wrote in a Nov. 1 letter to Austin.

“This mandate violates the personal freedoms of many Oklahomans, as it asks them to potentially sacrifice their personal beliefs in order to not lose their jobs,” Stitt wrote. “All of our national guardsmen take this calling very seriously. These are patriotic citizens who are willing to put their lives on the line to protect others in our communities during times of greatest need.”

Austin’s memo insists that the Defense Department can enforce the vaccine mandate even while troops are on duty with their states.

“All members of the National Guard must be fully vaccinated in order to participate in drills training and other duty conducted under Title 32, U.S. Code,” Austin wrote.

Under Title 32, a state governor is authorized by the president to activate the National Guard within his or her state. Troops under Title 32 orders serve on active duty under state control, but with pay and benefits provided by the federal government.

“No DoD funding may be allocated for payment of duties performed under Title 32 for members of the National Guard who did not comply with vaccination requirements,” Austin wrote.

Last month, Team Biden suffered court losses on three of its vax mandates which would require millions of American workers to get the Covid shots.

U.S. District Judge Terry Doughty in Monroe, Louisiana, temporarily blocked the Centers for Medicare & Medicaid Services (CMS) from enforcing its vaccine mandate for healthcare workers until the court can resolve legal challenges. The ruling applied nationwide, except in 10 states where the CMS was already prevented from enforcing the rule due to a prior order from a federal judge in St. Louis.

Doughty said the CMS lacked the authority to issue a vaccine mandate that would require more than 2 million unvaccinated healthcare workers to get the jab.

Also last month, U.S. District Judge Gregory Van Tatenhove in Frankfort, Kentucky, blocked Team Biden from enforcing a regulation that new government contracts must include clauses requiring that contractors’ employees get vaccinated. The contractor ruling applied in the three states that had filed the lawsuit, Kentucky, Ohio and Tennessee, one of at least 13 legal challenges nationwide against the regulation. It appears to be the first ruling against the contractor vaccine mandate.

The most sweeping regulation, a workplace vaccine-or-testing mandate for businesses with at least 100 employees, was temporarily blocked by a federal appeals court.

Defense Sec. Austin orders National Guard to get the jab or lose federal pay added by Editor Two on December 1, 2021
View all posts by Editor Two →