Day one: Turns out John Durham is alive and in court

Where is John Durham? There he is.

Special counsel Durham, who has rarely been seen in public during his three-year investigation, was seen at the federal courthouse in D.C. as his team delivered opening arguments in the criminal trial of Clinton campaign lawyer Michael Sussmann.

Sussmann duped the FBI with bogus anti-Trump information to “create an October surprise” in the 2016 presidential election, a federal prosecutor said in Tuesday’s opening arguments of the first criminal trial stemming from Durham’s investigation into the origins of the Trump-Russia hoax.

Sussmann is charged with lying to federal agents in September 2016 when he presented a top FBI official with two white papers and two thumb drives detailing a fabricated theory linking Donald Trump to Russia’s Alfa Bank.

Federal prosecutor Deborah Brittain Shaw told jurors that Sussmann’s goal was to get the FBI to investigate Trump and then pitch the story to media outlets.

“The evidence will show the defendant’s lie was all part of a bigger plan. It was a plan to create an October surprise on the eve of a presidential election — a plan that used and manipulated the FBI,” Shaw said in her opening statement. “It was a plan that largely succeeded.”

Michael Bosworth, a defense attorney for Sussmann, said his client was acting on a solid tip from Rodney Joffe, a cybersecurity expert.

Bosworth said The New York Times planned to run an article based on the purported Internet traffic linking Trump to Russia, telling jurors that Sussmann met with the FBI so the agency wouldn’t get caught flat-footed by the Times’ article.

FBI investigators looked into Sussmann’s tip and concluded it was meritless.

“We are here because the FBI is our institution. It should not be used as a political tool for anyone. Not Republicans. Not Democrats. Not anyone,” Shaw told jurors. “You will learn that Mr. (James) Baker and the FBI opened a case and devoted FBI resources to the serious allegations. The server did not reflect a crime, nor was it a threat to national security.”

In its case, the Durham team plans to discuss details of Sussmann’s meetings with Fusion GPS, the opposition research firm the Clinton campaign hired to dig up dirt on the Trump campaign.

The number of FBI agents and senior level FBI officials who have flipped and are cooperating in the Durham case against Michael Sussmann is jaw dropping. This is just the beginning.

The trial is expected to last two weeks.

The New York Post issued a scorecard for the trial’s major players: 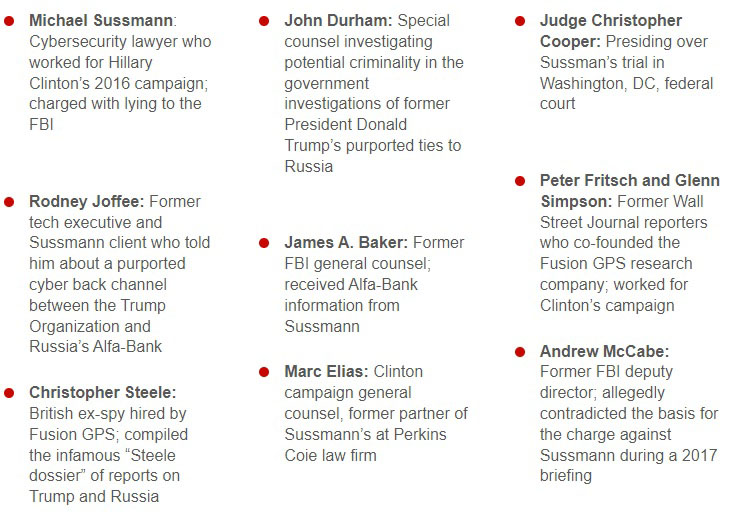