Multiple developments in the election fraud case in the small Michigan county of Antrim this week hold significance for investigations into nation-wide election fraud in the 2020 presidential race.

The election fraud lawsuit headed by lawyer Matthew DePerno took a major step forward on May 3 when a judge allowed submission of expert analysis of the county’s voting machines. 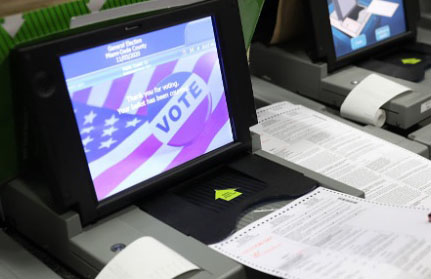 Mike Lindell, the CEO of MyPillow, also announced on Saturday that as part of his multiple legal contests with Dominion Voting Systems, the largest being a $1.6 billion lawsuit against the voting machine manufacturer, his team now has machines from Dominion and the other major manufacturers in their possession, and they are beginning forensic examinations.

“I’ll give Dominion a little scare this morning. Dominion, we have machines,” Lindell said. “Their big cover up is coming apart at the seams. If I worked for Dominion, I would be turning myself in. I wouldn’t let it get too much longer. It’s over for them.”

The basis of Lindell’s confidence stems from new documents submitted to the court this week, which showcased a Dominion machine used in Antrim County flipping votes, as recorded on video in real time by analyst Jeff Lenberg.

Lenberg’s demonstration is relevant well beyond Antrim County.  Its most significant aspect may prove to be that he has demonstrated the existence of both the means and the mechanism for algorithmic manipulation of votes across multiple states that physicist Douglas Frank discovered through mathematical analysis, https://www.youtube.com/watch?v=G9J7D2at9OI&t=3s as well as for cyber-attack manipulation and its connection to Chinese IP addresses alleged by Mike Lindell’s informants in the films Absolute Proof and Absolute Interference. https://lindelltv.com

The analyst responsible, Jeff Lenberg, is a systems vulnerability expert with high level security clearances and extensive background in national security software and hardware design in Washington, D.C. Lenberg was given access to the voting machines and the vote tabulation software.

Using software already on the machines, Lenberg was able to recreate the flipping of votes from Trump to Biden, which had been discovered after citizens in Antrim county voiced concern on Nov. 4.

Using that software, he was also able to conceal the flip from canvassing.

Lenberg, also shows the machine swapping ballots for House race but not the Senate, by means of its software presets he programed before the demonstration.

After the machine tabulator “tallies” the votes, the information is delivered to the Election Management System (EMS) machine.

Lenberg then demonstrates how simply and quickly the corresponding EMS machine’s database can be set up to prevent detection of the swapped votes during canvassing.

“I’m doing this manually. I don’t have a script for this,” he said, implying that had he instead written code to perform the action, it would have been instantaneous, as might occur during a cyber attack.

In just a few seconds, the county’s Election Management System database is adjusted to match the flipped votes in the machine tally tape, as if reporting real ballots.

Lenberg discovered the software tool for doing this was unauthorized and had been loaded on the Antrim County EMS machine prior to the election. That software, the Microsoft’s SQL Management Studio Version 17.1 “is not certified by the Election Assistance Commission (EAC) for use on electronic voting systems,” DePerno notes.

That is not authorized appears to be for very good reason. “The SQL tool is a utility that enables the modification of project files and databases on the EMS . . . and requires no special access beyond being able to log into the EMS itself,” court documents report.

Therefore, an actor with access to the EMS could create this manipulation of the voting record. Such actors include nation states, which could do so from any location if the machine were connected to the Internet and compromised. Previously, DePerno’s team used the Dominion voting machine manuals instructions for connecting the machines to the internet to show it can be done. Analysis of ES&S machines uncovered a chipset for internet communication on the motherboard, in spite of denial of such capabilities by voting machine manufacturers.

“Any nation state that compromised one of their computers; would have the encryption key needed to adjust files,“ due to the key’s easy access in the computer’s files, the company Cyber Ninjas noted in their analysis of the machines, also submitted to the court.

“It would be possible to alter election results prior to those result files being loaded into the EMS Server, or to alter configurations for the tabulators to make them behave in a certain way,” Cyber Ninjas observed.

All of this puts further pressure on Dominion’s denials and on the explanation given by State of Michigan officials that a county clerk’s failure to update software after a change to the physical ballot in a few precincts in order to included two down-ballot candidates somehow managed to flip the presidential race so extraordinarily.

R. Clinton Ohlers, PhD is a historian of science and religion and a contributing editor for the FreePressMediaGroup. Previously, he held the position of Research Assistant Professor in the Humanities at the University of Hong Kong. His book, The Birth of the Conflict Between Science and Religion, is scheduled for publication in 2022. His PhD in history is from the University of Pennsylvania.