A federal court has issued a temporary block against Team Biden’s vaccine mandate for private companies after a lawsuit filed by the state of Texas. 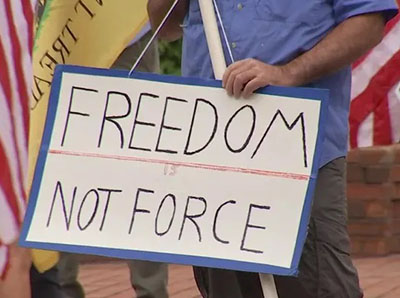 U.S. businesses with more than 100 employees were given a deadline by Team Biden of Jan. 4 to implement the vaccine mandate, which includes testing requirements for individuals who decline to receive the vaccination.

Employers who don’t comply could face fines of up to $14,000 per infraction, according to the government’s guidelines.

The court said the stay will hold “pending further action.” Team Biden has until Monday at 5 p.m. to challenge the stay.

The Fifth Circuit’s decision followed a joint petition filed by a handful of states, including Texas, several businesses and advocacy groups that argued overreach by Team Biden. The safety measures could, in some cases, preempt state and local laws, including Texas Gov. Greg Abbott’s ban on vaccine mandates.

“We will have our day in court to strike down Biden’s unconstitutional abuse of authority,” Abbott tweeted after news of the stay was announced Saturday afternoon.

“The quick turnaround by the Fifth Circuit to stay the mandate signifies the deep and obvious constitutional problems with the federal government’s private employer vaccine mandate,” Robert Henneke, general counsel for the Texas Public Policy Foundation, which was involved in the filing of the lawsuit, said in a statement. “That should send a message to the White House the mandate is not only ill-conceived but unconstitutional.”

A petition filed by Missouri Attorney General Eric Schmitt and representing 10 other states, declared the vaccine mandate is “unconstitutional, unlawful and unwise.”

The petition also challenges OSHA authority, claiming the agency does not have the jurisdiction to implement the regulations.

“Its unlawful mandate will cause injuries and hardship to working families, inflict economic disruption and staffing shortages on the states and private employers,” reads the petition.

“The federal government lacks the legal authority to compel private employers to play the role of vaccine or COVID police, lack the police power to force private employees to undergo medical treatment, and may not ignore constitutional limits on its ability to regulate every aspect of our lives,” said California-based attorney Harmeet K. Dhillon. “The Biden administration’s attempt to impose this unprecedented and unlawful federal medical mandate on the U.S. workforce without considering the public’s views is arbitrary, capricious, unsupported by the evidence, and would produce a willfully ignorant rule.”