Contempt for Congress called widespread; Jan. 6 Committee to subpoena to every single American

WASHINGTON, D.C. — Former Trump advisor Steve Bannon has been found guilty of contempt of Congress. …. While prosecutors expressed relief at the verdict, they also warned that there are still 330 million Americans with extreme contempt for Congress who are still roaming around freely. 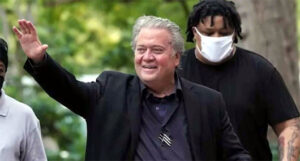 “At last the monster Steve Bannon who dared to have contempt for the sacred Select Committee will face justice,” said prosecutor Molly Gaston to reporters. “Sadly, he’s not the only danger to our hallowed democracy. I have just received word that there are over 330 million people in this country who have dangerous levels of contempt for Congress. They must be stopped.”

The January 6th Committee has sent subpoenas to every single person in America in order to test their loyalty and make those with contempt easier to find.

The DOJ responded by sending letters to FBI field offices across the country with guidance on how to round up these dangerous criminals who despise their elected representatives.

“Mark my words,” said Attorney General Garland. “Those who don’t like us will be hunted down and brought to justice.”

Contempt for Congress called widespread; Jan. 6 Committee to subpoena to every single American

Contempt for Congress called widespread; Jan. 6 Committee to subpoena to every single American added by Editor One on July 24, 2022
View all posts by Editor One →