As the Afghanistan catastrophe continues to unfold, the right thing to do would be for all of the top U.S. generals to resign, a columnist noted.

At the top of the list is Gen. Mark Milley, Chairman of the Joint Chiefs of Staff, Joy Pullmann wrote for The Federalist on Aug. 18. 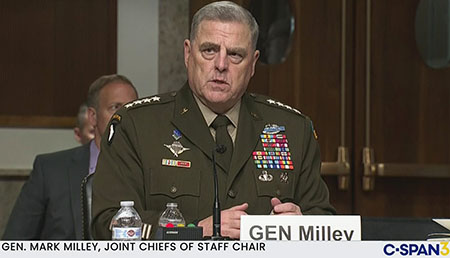 Milley “has spent the entirety of the Biden administration — as well as well before it — playing politics instead of doing his job. Because of his lies and cowardice, Americans and Afghans have died and our national security has taken a massive blow,” Pullmann noted.

It was clear from a timeline provided in a July 30 inspector general report to Congress that Milley was well aware of the deteriorating conditions on the ground in Afghanistan.

Pullmann noted: “What has Milley been doing as these events culminated in a spectacular national failure? Defying elected civilian control of the U.S. military, participating in top generals’ decades of big lies to foment their greed at America’s expense, demoralizing troops by endorsing the same racial extremism the Chinese Communist Party uses to destabilize the United States, and training military resources on American citizens over nonviolent political views.

“These are grounds for his resignation, firing, and prosecution.”

Milley has established a track record of defying elected, civilian control of the U.S. military.

Ben Domenech noted on Fox News “Primetime” in June: “General Milley was a major force undermining the Constitutional authority of the President of the United States during the insurrectionary summer of 2020. While American cities were literally on fire, in the grip of a violent uprising with a body count and pervasive fear, Milley assumed for himself the role of preventing the President from using his lawful authority to bring peace and order to our communities. He made it his mission to deny the American people the lawful and Constitutional aid of their own Armed Forces.”

Related: Why did President Trump not invoke the Insurrection Act? Reports point to Gen. Milley, June 29, 2021

On the July 15 broadcast of Fox News’s “Tucker Carlson Tonight”, Kash Patel, chief of staff to the former U.S. secretary of defense, said of Milley: “He wants to create and has created a joint staff operation that is a pseudo-defense department all on its own, which he has hijacked the authority of the secretary of defense and the president of the United States, and to execute as he sees fit and that is in contravention of the law.”

Carlson noted on the same show: “Ironically, preserving a peace deal with the Taliban was the same justification that Mark Milley used later in late 2020 to overrule Donald Trump’s order to pull out of Afghanistan. Milley told the president it was only possible to remove half American forces there, not all.”

Pullmann noted: “Look it’s not a general’s job to decide whether a president’s commands are ‘dangerous’ or ‘possible.’ That is for elected civilian heads of the military to decide. If the president tells a general to pull out of Afghanistan, the general’s job is to do that as effectively as possible, not tell the elected civilian head of the military, ‘No.’ Milley did that, even openly admitting it, and he should be fired for it — if not court-martialed and then sentenced.”

As Afghanistan was descending into chaos on his watch, Milley’s “public focus has been on defending political extremism that assists America’s enemies,” Pullmann wrote.

“Remember the Anchorage summit? The Chinese Communist regime amplifies and employs the Left’s false accusations of ‘systemic racism’ as a tool of psychological warfare against the United States. And Mark Milley helps instill this same anti-American ideology in America’s warfighters.”

At a speech to the 2020 class of the National Defense University, Milley smeared the United States, accusing it of the “systemic racism” of “unconscious bias.”

Milley declared: “We are still struggling with racism and we have much work to do. Racism and discrimination, structural preferences, patterns of mistreatment, unspoken and unconscious bias have no place in America. And they have no place in our armed forces.”

In the same speech, he also promised to make other military personnel placements according to race, to address concerns about “equity.”

On June 23, in his infamous “white rage” speech, Milley defended the military’s use of racist theories to indoctrinate troops. “I want to understand white rage, and I’m white,” he proclaimed, followed by repeating the leftist accusation that half of Americans are potential domestic terrorists deserving of mass surveillance, provocation, incitement, and harassment.

Pullmann noted: “Milley surely knows the strategic propaganda value of CRT to American adversaries. And he still chooses to aid our enemies while subverting the trust and morale of our very own troops as their leader. That’s quite simply treasonous.”

It is obvious that the Left and the Joe Biden regime will never hold Milley accountable.

“That means we must hold these shameful disgraces to our country accountable,” Pullmann wrote. “Mark Milley, Joe Biden may not be coming for you, but the American people will never forget what you have done. You’re afraid of us, and you should be.”