The United Nations and other governmental and non-governmental organizations are providing illegals with what is essentially a how-to manual for attaining refugees status in the United States, a report said. 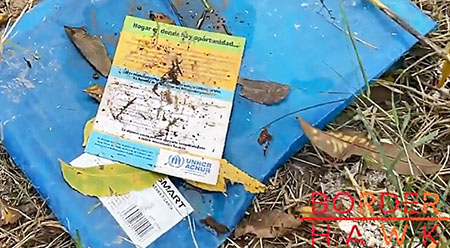 Spanish-language pamphlets and materials from the United Nations High Commissioner for Refugees, the Mexican government, and other organizations were found discarded by migrants trekking toward the U.S. southern border, according to Wid Lyman of the immigration news aggregate website Border Hawk.

Lyman said most migrants do not fit the United States’ definition of a refugee.

Lyman told National File in an interview that he found the pamphlets near Acuña, Mexico, a key entry point for illegals.

“The UN Refugee Agency is promoting, helping, and funding a lot of these migrants to cross,” said Lyman, who said he recorded video as he discovered several UN pamphlets abandoned in piles of trash.

Also among the piles of trash, human waste, and discarded documents, Lyman said he found government identification cards from as far away as Haiti and Senegal.

“This was a small area, we did not cover a large square mile. To see that much in a small area was telling,” Lyman said.