The Chinese Communist Party (CCP) has foisted a fentanyl/opioid plague upon Western Civilization and, in particular, the United States.

This undeclared war follows recent CCP crimes against humanity with the Wuhan Virus (Covid 19) and genocide against the Uighurs.

Over 100,000 Americans died last year from opioids, with fentanyl being the leading cause of death. Fentanyl is cheaper and easier to make and 50 to 100 times more deadly than morphine or heroin. An estimated cost to the American economy over five years is $819 billion.

A significant percentage of American males are not participating in the labor force due to synthetic drug opioid addiction. Also, less than 20% of young American males are eligible to serve in the U.S. military due to obesity, lack of education, criminal records, and drug abuse. And of those eligible, only 2% demonstrate any interest in joining.

All military branches are behind in recruitment goals. A factor in the lack of interest in the military is that young men and women interested in serving their country are not attracted to a culture based on Marxist, racist, “wokeness” ideology that denigrates America and American history.

The CCP is waging an undeclared war on the United States following the blueprint of Sun Tzu’s “The Art of War,” written in approximately 500 B.C. One concept describes waging war without engaging in direct battles. Mao Tse-Tung said, “We must not belittle the saying in the book of Sun Wu Tzu, the great military expert of ancient China, “Know your enemy and know yourself, and you can fight a thousand battles without disaster.”

The key is to demoralize and weaken the enemy, and what better way is there than to contaminate the enemy with opioids? The “One Hundred Year Marathon” by Michael Pillsbury is an excellent resource for understanding the War.

China has no significant drug problem due to its culture and a police state that punishes retail drug dealers with death. However, the CCP has no problem with Chinese chemical companies manufacturing for export the precursor chemicals that go into fentanyl and other opioids. The Chinese government also subsidizes manufacturing through subsidized research and development zones and tax credits for export.

After U.S. House Speaker Nancy Pelosi’s recent visit to Taiwan, China announced that it was suspending counter-narcotics cooperation with the United States. The limited cooperation had stopped directly-processed fentanyl exports from China through the U.S. Postal System. Instead of processed fentanyl, bulk precursor fentanyl chemicals are now shipped to Mexican and Chinese cartels for manufacture in Mexico for shipment to the U.S.

The Mexican criminal Sinaloa and Jalisco cartels dominate the market for supplying fentanyl to the U.S. It is easy and cheap to manufacture in makeshift labs. The cartels have long-established drug smuggling routes that quickly adapted to the changing drug markets. The cartels are also the leading force in guiding the massive influx of illegal immigrants into the U.S., adding to the difficulty of enforcing drug laws.   The most recent opioids look like colored candy and are even more potent. Enforcement of drug imports is difficult since many of the precursor chemicals are also used to manufacture legitimate pharmaceutical drugs.

CCP operatives working with Mexican cartels have taken over money laundering operations in the U.S. Millions of drug dollars are being flushed from the U.S. to China, often through Chinese students in America on student visas. The students bring suitcases full of money to Chinese money brokers operating through restaurants and other storefront businesses. Thus China’s covert opioid war with the U.S. is not only contaminating our youth, but China’s war is also being financed by Americans.

Chinese government officials in the Washington D.C. embassy said, “The U.S. has itself to blame for the root cause of fentanyl abuse in the country.” The descent of American culture due to drug abuse, the family unit breakdown, Wuhan Virus/Covid lockdowns, and lawlessness certainly contribute to the 100,000 deaths.

Don’t forget that social media outlets, some Chinese-owned, facilitate the purchase and shipment of opioids to American youth.

Why the U.S. government has not been aggressively prosecuting these money laundering operations through racketeering laws is a mystery. RICO statutes could be used against Mexican cartels and Chinese crime groups. China’s war on the U.S. should be viewed as a national security issue. Why not revoke the student visa of every Chinese “student” who picks up money for the cartels?

The mystery of why the U.S. Government is not doing more to counter China’s War could be answered in Peter Schweizer’s book “Red Handed,” but that is another subject for another day.

Laurence Sanford graduated from Boston College and then served in the U.S. Navy Pacific fleet from 1963 to 1966. He then served as an officer in the clandestine service of the Central Intelligence Agency for over 4 years, including a two-year assignment in Hong Kong. Mr. Sanford serves as a Senior Analyst with the American Security Council Foundation and is also President of the Association of Former Intelligence Officers — Florida Satellite Chapter. 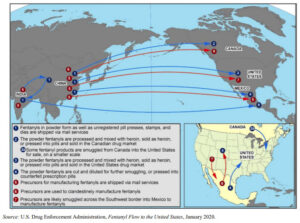 China’s other unreported war crime against American noncombatants: Fentanyl added by Editor One on September 25, 2022
View all posts by Editor One →