Membership in the Democratic Socialists of America has jumped from 6,500 to 70,000 over the last six years. 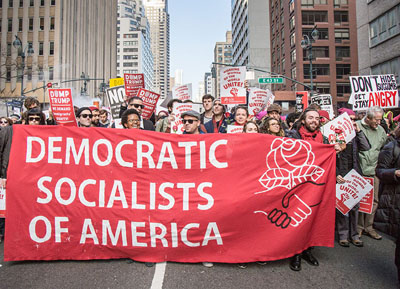 The Pew Research Center in 2019 conducted a survey which found half of Americans under the age of 30 expressed positive views of socialism — nearly as many as the 52 percent who felt positively about capitalism.

“Socialism has gone mainstream in American politics, but it remains deeply controversial. While some believe it offers an appealing solution to the country’s woes, for others it conjures up fearful imagery of authoritarian regimes,” CBS News noted in promoting the documentary.

Jabari Brisport, a Brooklyn teacher who embraces the socialist label and is running as a Democrat for a New York State Senate seat, said “The democratic socialist movement is being driven by millennials, zoomers, younger people. Younger people are interested in socialism because we can see so clearly the failings of capitalism.”

Maria Fernanda Bello, an activist with Young Americans Against Socialism, sees the trouble that’s gripped her native Venezuela as a warning. “Socialists are always going to promise you free tuition, free health care, free everything, but they will never promise you freedom,” she said.