What is believed by many to be England’s oldest pub, Ye Olde Fighting Cocks, first opened for business in the year 793. It has survived Vikings, Nazis, civil war, and plagues. 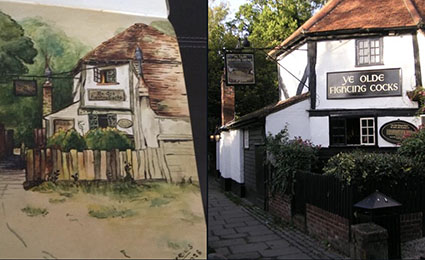 But can it survive Covid tyrants?

Earlier this month, the current operator of the pub in St. Albans which has been in operation for 1,229 years, announced that they have filed for bankruptcy, blaming “a sustained period of extremely challenging trading conditions.”

“Along with my team, I have tried everything to keep the pub going. However, the past two years have been unprecedented for the hospitality industry, and have defeated all of us who have been trying our hardest to ensure this multi-award-winning pub could continue trading into the future,” Christo Tofalli, who ran the pub, said in a Facebook post. “It goes without saying I am heartbroken: this pub has been so much more than just a business to me, and I feel honored to have played even a small part in its history.”

The property is owned by Mitchells and Butlers, one of Great Britain’s largest pub groups which told the BBC that it planned to keep the pub running with a new team at some point in the future. Tofalli confirmed that news, telling the BBC, “We are all looking for the best way forward for the pub but it will reopen with new owners and I hope they will keep a bit of the soul and spirit going.”

“Ye Olde Fighting Cocks — which reportedly received its current name after hosting literal cock fights back in the late 19th century — is likely to fight another day,” according to the Food & Wine website. “Still, even if Ye Olde Fighting Cocks sees its 1,230th birthday, which seems likely, the simple fact that such a world-famous pub couldn’t stay open on name alone would seem to indicate just how difficult owning a pub has been over the past couple of years.”