Can any booster save this flagging agenda? 3 signs the Jab Circus may be on its last legs

This whole thing might just collapse into a mountain of dust much more abruptly than most people would think.

Here are three interesting recent vaccine tidbits that further show the Forced Jab Facade is crumbling. The first two are hopeful signs while the third item is particularly entertaining. This con is ripe for a fall. 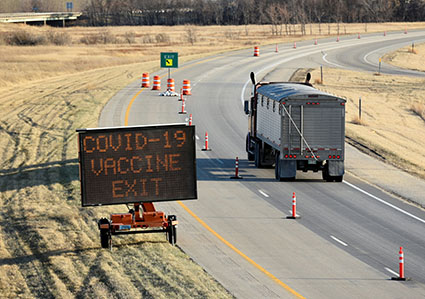 New rules requiring truckers to show proof of vaccination when crossing the Canada-U.S. border are cutting into shipping capacity and boosting the cost of hauling everything from broccoli to tomatoes.

The cost of transporting produce out of California and Arizona to Canada jumped 25% last week as fewer trucks are available to cross the border, according to George Pitsikoulis, president and chief executive officer of Montreal-based distributor Canadawide Fruits.

“The lower the supply, the higher the price. Ultimately it’s the consumer that pays for this,” Pitsikoulis said Monday by phone.

Canada implemented new rules on Jan. 15 that require border agents to turn away unvaccinated U.S. truckers, a move industry executives warned could slow down supply chains that are already under stress. Canadian truckers who can’t show proof of vaccination will be required to quarantine when they re-enter the country from the U.S….

Shipping is expected to get disrupted in both directions, with the U.S. set to impose its own vaccine mandate on foreign travelers on Jan. 22. Only 50% to 60% of U.S. truckers are vaccinated, according to an estimate from the American Trucking Associations.

But too many drivers aren’t falling for the pressure campaign:

“We understood that this would be a challenge for us,” Penner said in a Monday interview on BNN Bloomberg Television. “We have lost close to 10% of our overall capacity, with many drivers choosing to opt out prior to the deadline.”

“Most of Seattle area’s 200,000 unvaccinated adults say they will ‘definitely not’ get COVID shots” (Seattle Times Jan. 17):

According to new survey data, that number stood at around 216,000 in early December — and that number’s probably not coming down more much at this point. Most of the unvaccinated plan to stay that way, according to the survey.

The data comes for the latest release of the U.S. Census Bureau’s ongoing Household Pulse Survey, conducted from Dec. 1 to 13. There were about 61,000 respondents to the survey, which includes the nation’s 15 largest metro areas — Seattle just makes the cut at No. 15.

Big-box newspaper faces up to reality: The vast majority of unvaccinated Seattleites surveyed are not going to give in:

The latest survey data shows that the majority of the Seattle area’s unvaccinated adults — about 53% of them — are firmly entrenched in their opposition to receiving the vaccine, saying that they will “definitely not” get vaccinated. Another 15% said they would “probably not” get the jab.

The article notes there are strong coercion methods pushing these people to submit and get jabbed, and yet they still refuse to do so:

And for people who live in the Seattle area, there is an additional incentive to get vaccinated beyond the obvious health benefit: Without proof of vaccination (or a negative COVID test result), you can’t get into restaurants, bars, gyms, sporting events and many other venues in King County. Pierce and Snohomish counties don’t have this same vaccination requirement.

Two very healthy reasons were cited by those refusing:

The top reason for not getting vaccinated, selected by about 60%, was concern over side effects….

The second most-popular reason for not getting vaccinated, selected by about 55% in the Seattle area, was distrust of the government…

An additional “booster” dose of Moderna or Pfizer mRNA-based vaccine is needed to provide immunity against the Omicron variant of SARS-CoV-2, the virus that causes COVID-19, according to a study by researchers at the Ragon Institute of MGH, MIT and Harvard. The results of this study, reported in the journal Cell, indicate that traditional dosing regimens of COVID-19 vaccines available in the United States do not produce antibodies capable of recognizing and neutralizing the Omicron variant.

The World Economic Forum was quick to highlight this important new finding just in time for its Davos Agenda 2022 meetings.

Let’s perform the not-so-difficult task of connecting dots on Ragon.

From a 2020 interview with Ragon Institute Director Dr. Bruce Walker:

The Ragon Institute was established to bring people together across disciplines to combat really important global infectious disease issues…. And so, we sought to basically use the model of the Ragon Institute of bringing people together to see if we could do that on a larger scale, and we teamed up with other local scientists to establish the Massachusetts Consortium on Pathogen Readiness (MassCPR), which is, in a way, kind of a pop-up store. We set it up in very short order. We’ve been able to bring together people from the University of Massachusetts, MIT, Harvard, BU, and Tufts, and all of the academic hospitals and the Department of Health, to organize around trying to do something about the Covid-19 pandemic.

Guess who is on the team? Moderna, the same company that stands to profit substantially off of Ragon’s stunning new Omicron finding:

I think our vaccine development efforts are really encouraging. Moderna is part of the MassCPR, and they have a vaccine that looks like it’s getting reasonable responses in humans….

Director of the Center for Virology and Vaccine Research, BIDMC

Ragon Institute member Barouch “conducted the foundational research that enabled the design and subsequent development of the Johnson & Johnson “one-shot” Ad26 adenovirus-based vaccine,” the vaccine page reads.
Gee, what an amazing study that turned out to be!
And, yes, you knew this already but… Ragon has been heavily funded by Bill Gates.

The Ragon Institute of MGH, MIT and Harvard received $10 million from the Bill & Melinda Gates Foundation to move towards drug-free HIV remission.

Bruce Walker has received Gates funding for his personal research as well. 2010 article:

MIT did get a nod, however, as Gates called out the work being done on AIDS by researcher Bruce Walker, who is in part funded by the Gates Foundation.

Quite simply, none of this is believable anymore. No minds are going to be changed to support such a hollow narrative, and many who did fall into line will be backing away from the train wreck as its carnage continues to pile up.

There is very good reason to surmise that the creaking, tottering COVID Hysteria monolith will stop suddenly on a dime one day soon, with a manipulative ruling establishment immediately shifting its gears on to the next BIG THING.

After all, this was the modus operandi with the million different pieces of mud flung at the wall against Donald Trump when he was in the White House.

The pattern was familiar in those years: Something is the MOST IMPORTANT THING IN THE WORLD until it has become an obvious dead horse, and then the entire ruling machinery lurches perceptively and jumps on another horse.

Of course, there should be no way the ruling establishment can get away with such a jarring move after COVID hype literally shut down the planet for some two years, but there is every reason to believe they are going to try.

You already see its pawns attempting to pivot neatly from coronavirus to climate change.

And if you think Big Pharma is going to present a difficulty, think again. There are plenty of ways to conjure up a fictitious need for vaccines under the global warming scam as well.

Can any booster save this flagging agenda? 3 signs the Jab Circus may be on its last legs, WorldTribune.com