With half of the nation’s Border Patrol workforce reassigned to provide humanitarian support for “vulnerable populations,” a record number of illegal immigrants have slipped into the United States and “disappeared into border communities,” the agency’s chief told Congress. 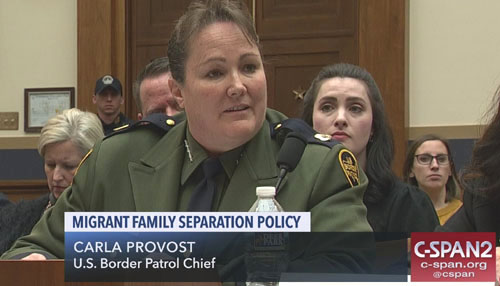 The overwhelmed frontline Homeland Security agency has managed to apprehend a record 593,000 illegal aliens this year, but an additional 100,000 have made it through and remain somewhere in the country. The distressing numbers were delivered last week by Border Patrol Chief Carla L. Provost, who told a House Homeland Security Subcommittee on Border Security that the situation along the southwest border is a crisis that is putting national security at risk.

“The demographic shift towards more vulnerable populations, combined with overwhelming numbers, has caused 40 to 60 percent of Border Patrol agents to be pulled away from our border security mission to provide humanitarian support—that’s 40 to 60 percent of our frontline workforce that is not available to stop drugs, gang members, and dangerous criminals from entering our country,” Provost testified.

She added that “100,000 individuals successfully crossed the border illegally and disappeared into border communities before agents could respond. This is the highest level of observed ‘got aways’ since Fiscal Year (FY) 2014. This high level of ‘got aways’ is a direct result of agents being reassigned from the frontline to provide humanitarian support to the unprecedented numbers of individuals and families in custody.”

Unaccompanied Alien Children (UAC) and family units represent 66% of all inadmissible individuals and apprehensions along the southwest border, Provost said, adding that the never-ending flow of illegal aliens has shattered agency records with more than four months remaining in the fiscal year. “This year-to-date level exceeds the full-year apprehensions of any fiscal year in the last decade,” the Border Patrol chief told lawmakers. “We have also set an unfortunate new record of the largest migrant group ever apprehended—more than a thousand migrants illegally crossing the border together in El Paso, Texas, in late May.” Provost painted a scary picture of an understaffed frontline agency slammed by a crushing wave of illegal immigrants that appears to have no end in sight.

It’s not the first time Border Patrol agents, who are also responsible for preventing terrorists and weapons of mass destruction from entering the U.S., are yanked from their crucial security mission. In 2014, when Barack Obama let an influx of illegal alien minors enter the country, the Border Patrol was forced to serve as a babysitting service. Judicial Watch obtained an internal document redeploying agents with “child care or juvenile teaching and/or counseling” experience to work at the various shelters that house the illegal alien minors. It appears the impact of that reassignment was not as severe as the current situation, which is deeply affecting a big chunk of the agency’s workforce. That makes military help essential, as Provost told federal lawmakers.

The Border Patrol chief confirmed that the deployment of U.S. Military personnel to the southwest border has benefited the nation tremendously. The National Guard is providing valuable air support in the form of light and medium lift helicopters as well as operational and surveillance support. Since President Trump deployed the military to the Mexican border in 2018, the Border Patrol has carried out thousands of apprehensions, seized thousands of pounds of dangerous drugs and performed multiple rescues, Provost testified.

Amid a storm of criticism from open borders groups and the mainstream media, President Trump started sending National Guard troops to the Mexican border last spring after declaring a national emergency. There are currently thousands of active-duty service members assisting the Border Patrol though they don’t operate in a law enforcement capacity. As long as the nation faces this immigration crisis, Provost said she will continue to ask for much-needed military support.

The surest way to improve the situation is for Congress to change immigration laws, the Border Patrol chief said, to dispel a widely believed notion that illegal aliens will be permitted into the U.S. if they come with children. Under current law, families are encouraged to make the trek north or send children on their own.

Provost said families from more than 50 countries have illegally crossed the border this year, including 742 from African nations. Others are from Vietnam, Romania, Ecuador and Brazil. “I have repeatedly asked Congress to act, to address the outdated legal framework and broken immigration system that has caused dangerous mass migration with no end in sight,” Provost said. “Without legislative solutions, CBP expects the need for continued DOD support to help address the diversion of resources away from the border security mission to the current humanitarian crisis.”