The Biden family raked in millions in deals with individuals tied to the highest levels of China’s intelligence apparatus while Big Tech companies placed appeasement of the communist regime in Beijing above the privacy of their users, according to new revelations in a book by Peter Schweizer.

During Joe Biden’s tenure as vice president, Hunter Biden partnered with multiple financiers with direct ties to Chinese intelligence, including the former head of the Ministry of State Security and the head of foreign intelligence recruitment, Schweizer writes in “Red-Handed: How American Elites Get Rich Helping China Win“. 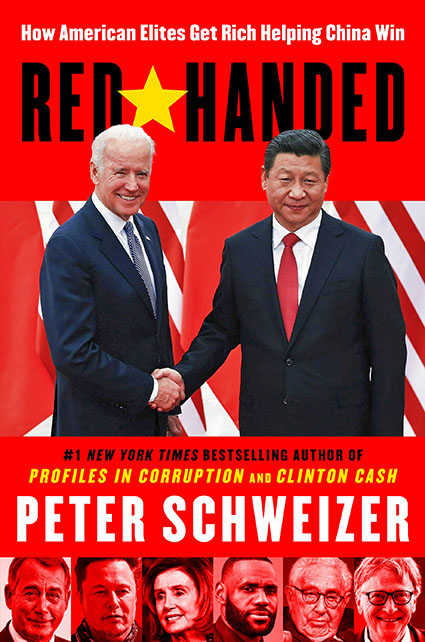 Some of those relationships remain intact, wrote Schweizer, president of the nonpartisan Government Accountability Institute (GAI) and the best-selling author of “Clinton Cash”.

The Biden family amassed $31 million from five deals in China, all with individuals with direct ties to Chinese intelligence, Breitbart News noted in a report on the book. Schweizer is also a Breitbart News senior contributor.

“Each deal the Bidens secured in China was via a businessman with deep ties at the highest levels of Chinese intelligence. And in each case there appears to be little discernible business or professional service that was rendered in return for the money,” Schweizer writes.

The book also reveals that Rosemont Seneca, another one of Hunter Biden’s many entities, set up separate phone lines to reach then-VP Biden, and paid for that monthly bill — a move Schweizer calls “not legal.”

“Beijing should certainly be happy with the overall posture of the Biden administration. The talk is tougher, but the main tenets of the foreign policy that Beijing wants Washington to pursue are secure: no radical reduction in the transfer of technology or capital from America to Beijing, no fundamental challenges to the Chinese regime, and mild criticisms over human rights accompanied by excuses for their conduct,” Schweizer writes.

Meanwhile, the New York Post published excerpts from the book which highlight some of the most egregious examples of U.S. tech giants colluding with communist China.

The book details Google’s opening of an artificial intelligence (AI) research center in China in 2017 which Gen. James Dunford, then chairman of the Joint Chiefs of Staff, told a U.S. Senate committee was a “direct benefit to the Chinese military.”

In 2015, the Obama Administration held an official State Dinner at the White House for China’s Xi.

The East Room was decorated in peach and pink roses.

The crowd included two hundred elite guests from the world of government and business.

Among them was Mark Zuckerberg, the young-looking cofounder of Facebook, and his wife, Priscilla, who was seven months pregnant.

When Zuckerberg finally got his chance to see the guest of honor face-to-face, he made an unusual request: would the communist dictator give his child his Chinese name?

Xi, understandably surprised by the request, declined, saying it was “too great a responsibility.”

Meanwhile, Breitbart News reported on Monday that LinkedIn, which is owned by Microsoft, censored a Breitbart story containing an excerpt from Schweizer’s book which focused specifically on Big Tech’s ties to the communist regime in Beijing.

When a LinkedIn user tried to share the excerpt on the platform, along with a post condemning China for genocidal policies, Linkedin removed the post for violating its “community policies.”

The user’s post said “even if you think nothing could surprise you anymore, THIS is shocking. The way these immoral and corrupt big-tech sycophants are kissing the ass of the CCP (who by the way are committing a GENOCIDE and have SLAVES in CONCENTRATION CAMPS as I write this) is not only pathetic, but downright shocking.”

According the user, who alerted Breitbart News to the Big Tech company’s censorship, Linkedin said his post violated its community guidelines against “bullying.”