Bill would prioritize the securing of U.S. southern border over Ukraine’s

As Team Biden and its Big Media allies flood the news cycle with Russia’s possible invasion of Ukraine, a Republican lawmaker said the ongoing invasion at the U.S. southern border should be prioritized.

Rep. Matt Rosendale of Montana introduced legislation on Tuesday that would block security and military assistance to Ukraine until the U.S. southern border is secured. 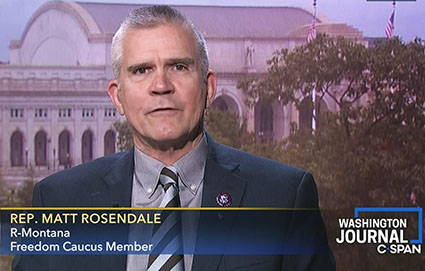 The Secure America’s Border First Act would prohibit the expenditure or obligation of military and security assistance to Kyiv until there is “operation control” of the U.S.-Mexico border.

There were 178,840 migrant apprehensions at the U.S. southern border in December alone. Along with the massive numbers of migrants, drugs such as fentanyl continue pouring into the U.S. through Joe Biden’s open border.

“I think it’s quite hypocritical if someone in the U.S. Congress is willing to expend funds to secure a border overseas thousands of miles away while they’re not willing to secure our own border,” Rosendale told Fox News Digital in an interview. “And we are witnessing not a threat, but we are witnessing an absolute invasion that is taking place right now.”

Rosendale said that the U.S. “has no legal or moral authority to come to Ukraine’s aid. And we have war hawks on both sides of the aisle willing to go over there and spend American blood and treasure in Ukraine and what I’m saying is we’re not obligated and so at least the minimum we can do is secure our own border first if you are going to go over there and spend money.”

Rosendale’s bill would hold funds back until the border wall system, which was halted by Team Biden, is completed, and “operational control” as defined by the 2006 Secure Fence Act is achieved.

“We witnessed an invasion over the last year of two million individuals trying to get into the country, we’re not even sure how many of them have been successful, so lets build the border wall system, let’s gain operational control of our southern border, and then we might be able to have a conversation about what we’re going to do overseas about securing someone else’s border,” Rosendale said.

The Biden administration also has yet to release a report on Immigration and Customs Enforcement’s (ICE) arrests and deportations in Fiscal Year 2021, which was expected at the end of the year. Critics believe Team Biden is stalling on the report that will contain politically damaging information for the administration.

“This is unprecedented,” Jon Feere, a former ICE official now with the Center for Immigration Studies, told Fox News. “It’s something ICE does every year proudly because agents and officers want to show the results of their hard work over the last year, and for the Biden administration political appointees to not want to produce this is really a slap in the face to the hard-working career officials, and more importantly it’s clearly a political effort aimed at hiding the impact of the Biden administration’s policies.”

Biden’s policy “is this: If you are a Nigerian doctor or a German machinist who wants to come to America, you have to be vetted for years,” Kennedy said. “But if you are some gang-banger drug dealer who just hops the fence at the border, you are welcome. And we’ll fly you anywhere you want in America. Now, that is just bone-deep, down to the marrow stupid.”

Bill would prioritize the securing of U.S. southern border over Ukraine’s added by Editor Two on February 8, 2022
View all posts by Editor Two →