It’s not just bias. Big Tech goliaths Facebook and YouTube, which is owned by Google’s parent company Alphabet, Inc., are working hand-in-glove with a progressive ruling establishment that is using the Democratic Party to destroy America.

This isn’t mere hyperbole. The two signature online sites are openly aligned with progressives to advance their agenda. 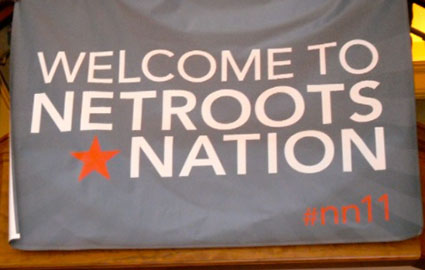 Netroots Nation is, in its own words:

…a non-profit organization that provides trainings, resources and connection opportunities to help progressive activists create a more progressive and just world. Since 2006, Netroots Nation has hosted the largest annual conference for progressives, drawing up to 4,000 attendees from around the country and beyond. Our annual event brings together diverse voices from around the country and beyond.

Anyone who desires a more progressive and just world is welcome. Our attendees are politicians, online organizers, grassroots activists, and independent media makers. Some are professionals who work at advocacy organizations, progressive companies or labor unions; while others do activism in their spare time.

There’s nothing the least bit moderate about Netroots. Which does not prevent the annual conference from holding major sway in Democrat ranks, with 2020 Democratic presidential candidate Sen. Elizabeth Warren (D-MA) having made multiple appearances over the years. Biden administration Vice President Kamala Harris has trekked to Netroots in the past, along with numerous other prominent Democrats, such as Rep. Alexandria Ocasio-Cortez (D-NY).

This year’s conference is being held in Pittsburgh on Aug. 18-20.

“Premier Sponsors” include exactly who you would expect at such a partisan confab. Act Blue and leftist website Daily Kos immediately garner attention. Below them, in the “Sponsors” category, is the Democratic Governors Association, the Democratic National Committee, pro-abortion groups Emily’s List and NARAL, leftist media hit group Media Matters and the radical activist organization MoveOn.

Inspiring, serving and building your community.

Learn how to reach and engage your community, voters and supporters with Facebook apps and technologies.

YouTube has a range of tools and resources to help those focused on civic engagement build their brands and connect with audiences. Check out our training at Netroots 2021!

That’s right, YouTube is more than just a sponsor of Netroots. It is an active participant.

Let’s look into its contribution to the progressive conference in 2021.

The training session was titled “YouTube Best Practices For Civics.” Lest there be no doubt, it is clearly stated:

The moderators provide eye-opening insight on what is going on at the video sharing site that thrives on censoring conservative and America First content:

Emily Keller is a digital strategist who worked on several campaigns for progressive candidates and causes as well as the Social Media Director at the DNC, before joining YouTube in 2021.

John currently manages content partnerships with YouTube Creators focused on news, politics, and civic engagement within Google in Los Angeles, CA. He previously worked on the same team with officeholders and candidates in Washington, DC. Before that, John worked on Google’s 2016 U.S. Election team and Senator Dianne Feinstein. John is originally from San Francisco, CA and graduated from the Walsh School of Foreign Service and McDonough School of Business at Georgetown University.

Ah, but the protestation automatically comes: Big Tech reaches out to conservatives too! Facebook has sponsored CPAC and YouTube announced it planned to hire Republican “strategic partner managers” to go with those on the Left. Let’s dive into that as well.

This spin campaign was indeed touted in 2021. The Washington Times reported:

YouTube also is hiring a new strategic partner manager for conservative civics partnerships in Washington. The job involves driving “political entities on the conservative side of the aisle” to use the site and “working with principals and their staff” to build a presence on YouTube, according to a listing for the position.

The company says it has previously invested in conservative outreach and is continuing those efforts this year.

“Like most companies, we have experts for many of our content categories and are continuing to grow the partnerships team that works specifically with a variety of civics creators, across the political spectrum,” said YouTube spokeswoman Ivy Choi in an email.

It appears that the person selected for the job is exactly the type of “conservative” YouTube would hire. Anthony LeCounte’s LinkedIn page reads:

Former President of Pride at Darden, the LGBTQ business student organization, and Chief of Staff of the Adam Smith Society, which promotes debate and discussion about the benefits of free markets.

As a product manager at Google, I work with YouTube content creators to maintain YouTube’s value as a destination for healthy civic engagement.

In 2019, The Washington Post exulted in highlighting the “conservative” political stylings of LeCounte’s same-sex “marriage,” which was presided over by a sitting Republican member of Congress:

Anthony LeCounte and Alex Pisciarino promised their guests a “fabulous gay summer wedding.” The setting was a vineyard in the foothills of the Blue Ridge Mountains. The dress code, a seersucker-linen-chiffon homage to the Kentucky Derby.

And the officiant was a Republican congressman from a conservative district in the rural South.

Rep. Denver Riggleman (Va.) did the honors for LeCounte and Pisciarino on Sunday evening at King Family Vineyards in Crozet, west of Charlottesville.

The Post, always considerate enough to properly instruct conservatives as to the true nature of their cause, dutifully emphasized that this was indeed quite the conservative affair:

The couple Riggleman married met at a Log Cabin Republicans event in the District. And like Riggleman, they consider themselves conservatives, not moderates. They support gun rights, for example. Pisciarino’s first job was for the tax-and-spending hawk Club for Growth. LeCounte, an Army brat, wants a strong national defense.

The moderate Republicans who are more likely to embrace gay rights tend to be “squishy on issues we care about,” he said.

Here’s all you need to know about the allegedly stalwart conservative and now-former congressman Riggleman:

My thoughts on why impeachment is necessary

GOP colleagues have stated that impeachment is divisive and could cause further violence. I disagree. Allowing President Trump to walk away, validates messianic conspiracy theories and disinformation. It could me more dangerous. Thread

This is worth mentioning to get to the higher point: Big Tech’s previous sponsorship of CPAC. Given what we now know about the once-respected annual conservative get-together, all signs point to a flagrant attempt to manipulate the conservative movement.

Michelle Malkin, a former CPAC speaker now blackballed due to her unforgivable sin of speaking at an America First gathering, wrote earlier this month:

[House Minority Leader Kevin] McCarthy [R-CA] told a CNN reporter on Monday that it was “appalling and wrong” for Republican Reps. Marjorie Taylor Greene, R-Ga., and Paul Gosar, R-Ariz., to speak to the annual America First Political Action Conference, or AFPAC. I have personally addressed and supported AFPAC since its inception in 2019.

It is the authentic alternative to the moldy, Swamp-run Conservative Political Action Conference, or CPAC, from which a rising generation of staunch immigration restrictionists and conservative Christians are banned and blacklisted (including me) — while drag queens, foreign sponsors, and Big Tech titans Google and Facebook have been welcomed by CPAC with open arms.

Leftist site The Daily Beast reported in 2017 that CPAC was delighted to receive Facebook’s support:

“We are glad Facebook agreed to be at CPAC and to acknowledge the importance of conservatives to their company, and we continue to work with them on issues important to conservatives,” he said.

Malkin highlighted the gatekeeping that always happens once a “conservative” group or conference such as CPAC is blessed with official “authoritative” status by the ruling establishment:

On Monday afternoon, the Republican-dominated state Senate in Arizona issued a “censure” of populist America First state Sen. Wendy Rogers for similarly addressing AFPAC by video. The eunuchs had nothing to say about the actual violent bomb threats that were called into the hotel that hosted our conference. Instead, they hysterically accused Rogers for “threatening” violence because she demanded that “high-level criminals” responsible for COVID-19 vaccine injuries and deaths face consequences for their actions — and that convicted traitors be forced to face the gallows.

Now, Arizona state GOP weenies want to strip Rogers of her committee assignments, just like Traitor Kevin McCarthy did to former GOP Rep. Steve King of Iowa after The New York Times character assassins deceitfully painted him as a “white supremacist” for decrying those who have turned the phrase “Western civilization” into hate speech.

Facebook and Google are corporate anchor tenants of the ruling progressive establishment. Any overtures they may make to an alleged Right should always be seen for what they are. And those who welcome such support should be seen as engaged allies in their machinations.

Big Tech actively works with Democrats as it promotes gatekeeping within the heavily censored Right, WorldTribune.com