Still giddy about those $1,400 stimulus checks? Skyrocketing inflation brought on by Joe Biden’s economic policies will cost American households an additional $5,200 in 2022.

“Inflation will mean the average U.S. household has to spend an extra $433 per month compared to last year for the same consumption basket,” wrote Bloomberg economists Andrew Husby and Anna Wong. 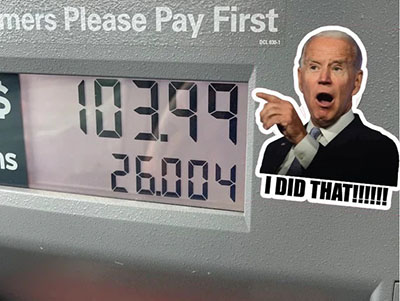 Inflation reached a 40-year high in January, accelerating to a 7.5% annual rate.

According to the Bloomberg economic team, “accelerated depletion of savings will increase the urgency for those staying on the sidelines to join the labor force, and the resulting increase in labor supply will likely dampen wage growth.”

Biden’s economic policies are hitting low-income Americans the hardest. Such households have the least savings to cushion against rising prices, and wage growth is set to slow as the workforce continues to grow from pandemic lows. Even if a worker experienced a 10% growth in wages, food and energy inflation could completely offset the raise, the Bloomberg economists said.

Inflation gauges, such as the Consumer Price Index — which measures what consumers pay for goods and services — have already recorded prices soaring at the highest rate since 1982.

This January’s rate of 7.5% topped December’s 7% annual rate, with both figures well above the 1.8% annual rate for inflation in 2019 during the Trump administration.

Thanks to Bidenomics, prices have increased sharply for several everyday household items, including food, cars, housing and electricity.

The Food and Agriculture Organization of the United Nations (FAO) found that food prices in January reached record highs. This was according to the Food Price Index, which has increased by 20.7% since February 2020, according to a report which was submitted before the conflict in Ukraine expanded.

Food and energy costs, which includes gasoline and home heating, account for $2,200 of 2022’s inflation, the Bloomberg Economics team said.

On March 24, Biden warned that food shortages could be imminent as a result of sanctions imposed on Russia by the U.S. and its allies. Biden made the remarks during a press conference at a NATO summit in Brussels.

“With regard to food shortage, yes we did talk about food shortages, and it’s gonna be real,” Biden said following a meeting with multiple world leaders. Biden went on to say that the sanctions would cause hardships for Americans in addition to Russia. “The price of sanctions is not just imposed upon Russia,” he continued. “It’s imposed upon an awful lot of countries as well, including European countries and our country as well.”

Russia and Ukraine produce 25% of the global wheat supply, according to the Observatory for Economic Complexity. While neither of these countries export wheat to the U.S. directly, their absence from the global market is expected to strain supply and push prices higher.

Bidenomics inflation to cost average U.S. household an additional $5,200 this year added by Editor Two on March 31, 2022
View all posts by Editor Two →