As a result of Team Biden’s attack on domestic oil production and the forced transition to alternative energy sources, Americans are now paying on average $5 for a gallon of gas and up to 233% more for electricity. 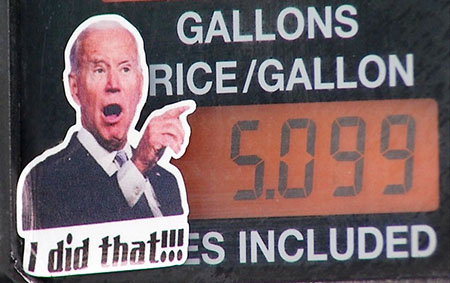 According to AAA, the national average for a gallon of regular gasoline hit $4.970 on Thursday, another all-time record high. JP Morgan estimated that gas prices will top $6 per gallon by August.

Electricity rates are up from 77% to 233% in the last year, according to the Federal Energy Regulatory Commission (FERC).

And now Biden’s energy policies have set the stage for massive rolling blackouts throughout the nation this summer, analysts say.

Following a report that up to two thirds of the country could face blackouts this summer as a result of Team Biden’s policies, the Wall Street Journal editorial board wrote:

“We’ve been warning for years that climate policies would make the grid more vulnerable to vacillations in supply and demand. And here we are. Some of the mainstream press are belatedly catching on that blackouts are coming, but they still don’t grasp the real problem: The forced transition to green energy is distorting energy markets and destabilizing the grid.”

Granholm, whose net worth is estimated at $8 million, “has repeatedly come under criticism for laughing off or dismissing concerns about soaring prices at the pump,” Fox News noted.

“You know, if you drive an electric car, this would not be affecting you, clearly,” Granholm said during a White House briefing in May 2021. That was well before Russia invaded Ukraine, but facts don’t get in the way when Team Biden spreads the blame.

Granholm is the very same leftist who, before hooking up with Team Biden, appeared in a music video calling for a ban on gasoline.

Republicans on the House Ways and Means Committee noted earlier this year that, due to Bidenlfation, the average American has seen three years of wage gains wiped out.

“Democrats’ answer to this energy crisis? ‘Accelerating’ their Green New Deal agenda with $145 billion in tax hikes on traditional Made-in-America energy and $550 billion in green welfare subsidies to special interests and the wealthy,” the committee Republicans wrote.