On Oct. 15, 2020, Joe Biden’s Twitter account posted the following: “We’re eight months into this pandemic and Donald Trump still doesn’t have a plan to get this virus under control. I do.” 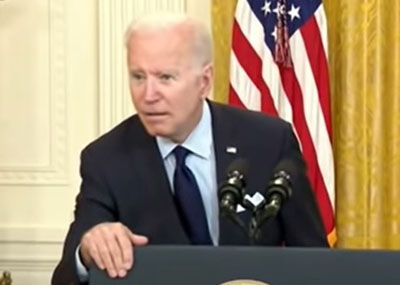 Nearly a year after being installed in the White House, Biden on Monday admitted that his team, in fact, does not have a plan.

“There is no federal solution. This gets solved at the state level,” Biden said during a conference call with U.S. governors, after Arkansas Gov. Asa Hutchinson cautioned the Biden against taking actions that may step on states’ toes as they aim to fight the virus.

Biden’s admission contrasts from his constant claims during the 2020 campaign that he would put in place a plan to end the pandemic.

“I’m going to shut down the virus, not the country,” Biden promised during several campaign speeches.

Both promises have been shattered. On Christmas even, New York state set a new record for Covid-19 cases reported in a single day as 49,708 people tested positive.

Team Biden also continues to institute mask mandates for travel that have led to high anxiety and even reported acts of violence on planes and vaccine mandates, including one for private businesses with more than 100 employees, that would adversely affect millions of Americans.

And the White House website still features “a six-pronged, comprehensive national strategy” titled “Path out of the Pandemic.”

Arkansas Republican Sen. Tom Cotton accused Biden of trying to escape blame for his administration’s failures: “When Joe Biden says ‘there is no federal solution,’ he’s trying to avoid blame for his incompetence. If he really believes this, he should rescind his unconstitutional federal mandates.”

Christina Pushaw, press secretary for Florida Gov. Ron DeSantis, posted a montage of Biden’s statements saying that he would “shut down the virus,” concluding with his statement from Monday.

What a difference a year makes 👀 pic.twitter.com/IGF7A3Kp4e