The pieces of the Benghazi puzzle are falling into place and the conclusions are damning: America’s intelligence community, our leading military commanders and then-Secretary of Defense Leon Panetta knew within fifteen minutes of the commencement of hostilities on Sept. 11, 2012 that the American compound in Libya was attacked by Al Qaida-affiliated terrorists.

Yet, President Barack Obama and his then-Secretary of State Hillary Clinton conspired to deceive the American people in order to protect their mutual power. They deliberately downplayed the role of Islamic terrorists. 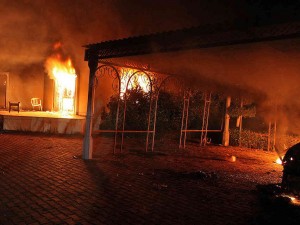 They did so in order to win a second presidential term for the Democratic Party and in an attempt to preserve the reputation of Mrs. Clinton for her possible run at the top office in 2016.

Now, more than a year later, the truth is emerging with devastating clarity.

A bipartisan Senate Intelligence Committee report contains a key email, sent on Sept. 15, 2012, from the CIA station chief in Libya to then-CIA Deputy Director Michael Morell which states that the Benghazi attacks were “not/not an escalation of protests.”

Mr. Morell received this information the day before then-Amb. Susan Rice delivered the infamous phony narrative on five Sunday talk shows: she said the violence occurred in a spontaneous manner due to protests against an anti-Muslim YouTube video.

During November hearings on the issue, Morell attempted to blame the FBI for the erroneous talking points given to Ms. Rice, said Republican Sen. Lindsey Graham in a recent Fox News interview. Yet, in a phone call to confirm this, the FBI “went ballistic” and refused to accept the blame, said Sen. Graham.

“Within 24 hours, his [Mr. Morell’s] statement was changed where he admitted the CIA had done it,” said Graham.

Therefore Morell fed the talking-points-spread-confusion about what had happened that night, even though he knew the violence in Benghazi was caused by a jihadist terrorist attack.

Morell is currently a CBS news commentator and a counselor at Beacon Global Strategies, a firm founded by Clinton surrogate Philippe Reines. The firm advises companies on investing in America and around the world.

The Obama administration has attempted to suggest there was disinformation and confusion as events unfolded in Benghazi and that the various bureaucracies bungled information along the way. These are deliberate lies: our top intelligence officials had done their job well — until they were told by leading political operatives to change the story.

The CIA had in fact been vigorously warning that an attack on Sept. 11 was likely. Then-CIA Director Gen. Petraeus had sent a cable to Cairo on Sept. 10 warning that jihadists were threatening to break into the American embassy in Cairo. Five well-known Al Qaida-linked terrorists were planning a rally in Cairo, which the CIA feared would spiral into violence. Hence, the CIA was aware of the imminent threat Al Qaida posed in Cairo — and at all American outposts on the anniversary of Sept. 11.

In light of this information, all American outposts should have been fortified and on high alert by Sept. 11 — especially the one in Libya that was classified as “high risk.” This was all the more urgent since on Sept. 10 Al Qaida leader Ayman al-Zawahiri was calling for violence, urging Libyans to avenge the death of his deputy Abu Yahya al-Libi, who was killed in a U.S. drone strike in June, 2012. Yet, as the 9/11 anniversary approached, not a single directive was issued to alter America’s military posture to ensure all U.S. interests were adequately guarded against known jihadist threats.

In fact, the State Department and the Commander-in-Chief repeatedly ignored all the warnings and information from their sources on the ground. Based on recently de-classified information, we now know that Marine Corps Col. George Bristol, commander of AFRICOM’s Joint Special Operations Task Force for the Trans Sahara region, had warned State Department officials in Tripoli about the dangers looming on Sept. 11: “if [the terrorists] were going to try something … this would be a day,” he testified.

But, no one listened. And security was not reinforced.

The attack on Benghazi on Sept. 11 took place in a context in which Al Qaida operatives were brimming with rage and publicly announcing they would strike.

Hence, when the attack occurred in Benghazi, every leading American official, in Washington D.C. and in Libya, immediately knew exactly what was happening.

Gen. Carter Ham, head of AFRICOM, knew by 3:42 p.m. Eastern Daylight Time, that there was a terrorist strike in Libya. Gen. Ham promptly relayed this information to Chairman of the Joint Chiefs of Staff Gen. Martin Dempsey and then-Defense Secretary Leon Panetta, according to Mr. Ham’s testimony on June 26, 2013 to the committee investigating Benghazi.

Concurrently, at 4:05 p.m., a State Department email notified the White House and Pentagon of the attack.

Panetta had a meeting with the president at 5:00 p.m. in which he told him there was a terrorist attack in Benghazi, said Panetta in his testimony to the Senate Armed Services Committee in February 2013. In other words, President Obama knew without dealy by information pouring in from multiple avenues that terrorists had attacked Benghazi — and that his entire re-election strategy was in jeopardy.

The Deputy Chiefs of Mission in Libya Gen. Gregory Hicks was sending vital information to Washington D.C. throughout the attack, he said to the House oversight committee on May 8, 2013. He had heard from Amb. Chris Stevens in a harrowing phone call: “Greg, we are under attack!” He spoke directly with Secretary of State Hillary Clinton that evening and briefed her on the terrorist attack, he testified.

Within two hours of the start of the attack, at 6:06 p.m., the State Department issued an email that was widely circulated among key officials, declaring that Ansar al-Sharia, an Al Qaida affiliate, was claiming responsibility for the attack.

Hence, without the shadow of a doubt, America’s top two leaders had the same information as quickly as it was possible to get it. And everyone — from the intelligence community to the military top brass to the boots on the ground — said the same thing: Al Qaida-linked terrorists were attacking us.

Both Obama and Clinton were inexperienced upon coming to such high offices, and both had been warned repeatedly by all top leaders of key agencies of the impending dangers and of the need to beef up security.

Both had ignored the warnings, and the reputations and political careers of both were hanging in the balance.

After all, wouldn’t responsible commentators point out that the much-maligned George Bush had kept national interests safe, and they, whose political raison d’etre was to be anti-Bush, had failed so miserably in their elemental duty to the American people? The unfolding fiasco was too much for them to bear.

If they were conscientious, they would have each tendered their resignations. Instead, they clung to one another in desperation, hanging on for dear political life. They and their top-tier communications strategists concocted a plan: de-emphasize terror, do not mention Al Qaida affiliates, forget Islamist and say “spontaneous protest” and “video.” That should muddy the waters enough to pull the wool over the eyes of the public.

That evening, at 10:00 p.m. Obama called Clinton to discuss the unfolding crisis in Benghazi, confirmed White House Press Secretary Jay Carney on Feb. 20, 2013. At around that time in the evening, the public misinformation campaign began. Clinton released a statement titled “Statement on the Attack in Benghazi.”

“Some have sought to justify this vicious behavior as a response to inflammatory material posted on the Internet,” Clinton said in the statement. “The United States deplores any intentional effort to denigrate the religious beliefs of others. Our commitment to religious tolerance goes back to the very beginning of our nation. But let me be clear: There is never any justification for violent acts of this kind.”

The next morning, Obama and Clinton had a meeting at the State Department at 10:50 a.m. What did they discuss?

We can surmise they clarified their plan to further their misinformation campaign. In subsequent days, they found a willing, foolish patsy in Ms. Rice.

On the day of the Obama-Clinton face-to face meeting, Sept.12, the chief of station in Libya sent a cable reporting that eyewitnesses had confirmed that Islamic militants had attacked the compound. And again, by Sept 15 he sent an email to Morell emphasizing that there were no protests in Libya.

Hence, by inches, through all the investigations underway, the lie has been fully exposed, beyond the shadow of any doubt.

Obama should resign in disgrace — both for lying to the public prior to his reelection and for the shoddy leadership that resulted in the deaths of four Americans. And Clinton has shown that she is unfit to hold office.

And everyone involved in falsifying information–Obama, Clinton and Morell — must be prosecuted. The public was defrauded of their right to cast an informed vote in 2012 based on the truth on a matter affecting our national security.

The bipartisan Senate Committee states the attacks were “preventable.” By whom, we ask? Obviously, the answer is: by the then-Secretary of State and the Commander in Chief, of course.

Hence, the last five years have shown that when amateurs are elected to high office, brave Americans get killed. Obama and Clinton should be hounded out of the public square and prosecuted for their gross negligence and dereliction of duty.

For the sake of Amb. Chris Stevens, Sean Smith, Tyrone Woods, Glen Doherty and all those wounded in the attack, the Benghazi scandal must remain in the public spotlight until justice is duly served.

Grace Vuoto is the Editor of Politics and Culture at World Tribune, host of American Heartland with Dr. Grace on WTSB Radio and is the founder of the Edmund Burke Institute for American Renewal.

Benghazi e-mail finally answers the basic questions: Who knew what, when? added by Editor One on February 10, 2014
View all posts by Editor One →