Barack Obama and Richard Nixon: Neither approved the wiretaps of their political enemies

No evidence was ever produced that Richard Nixon approved the Watergate break-in. Likewise President Donald Trump has offered no proof that former President Barack Obama knew of the wiretapping of Trump Tower, media reports say.

The Watergate scandal ended in Richard Nixon’s resignation and inspired a generation of adversarial media relations with the White House. Will Barack Obama face similar scrutiny? 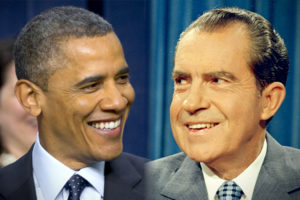 According to the History Channel’s description of Watergate: “While historians are not sure whether Nixon knew about the Watergate espionage operation before it happened, he took steps to cover it up afterwards, raising ‘hush money’ for the burglars, trying to stop the FBI from investigating the crime, destroying evidence and firing uncooperative staff members.”

“I will tell you this,” Levin said. Obama “is more involved than he says; it’s his executive branch.”

Levin, on his radio show and appearances on Fox News, cited specific examples of reporting, including pieces by The New York Times, Washington Post, the Guardian, the McClatchy news service, and libertarian website Heat Street.

With the exception of  Heat Street, these outlets represent the left-leaning “mainstream” media in the United States and, in the case of the Guardian, the United Kingdom.

“Two separate sources with links to the counter-intelligence community have confirmed to Heat Street that the FBI sought, and was granted, a FISA court warrant in October, giving counter-intelligence permission to examine the activities of ‘U.S. persons’ in Donald Trump’s campaign with ties to Russia.”

2. The Guardian on Jan. 11, 2017: “The Guardian has learned that the FBI applied for a warrant from the foreign intelligence surveillance (FISA) court over the summer in order to monitor four members of the Trump team suspected of irregular contacts with Russian officials. The FISA court turned down the application asking FBI counter-intelligence investigators to narrow its focus. According to one report, the FBI was finally granted a warrant in October, but that has not been confirmed, and it is not clear whether any warrant led to a full investigation.”

“WASHINGTON — The FBI and five other law enforcement and intelligence agencies have collaborated for months in an investigation into Russian attempts to influence the November election, including whether money from the Kremlin covertly aided President-elect Donald Trump, two people familiar with the matter said.

The agencies involved in the inquiry are the FBI, the CIA, the National Security Agency, the Justice Department, the Treasury Department’s Financial Crimes Enforcement Network and representatives of the director of national intelligence, the sources said.”

“WASHINGTON — American law enforcement and intelligence agencies are examining intercepted communications and financial transactions as part of a broad investigation into possible links between Russian officials and associates of President-elect Donald J. Trump….

The F.B.I. is leading the investigations, aided by the National Security Agency, the C.I.A. and the Treasury Department’s financial crimes unit. The investigators have accelerated their efforts in recent weeks but have found no conclusive evidence of wrongdoing, the officials said. One official said intelligence reports based on some of the wiretapped communications had been provided to the White House.”

“WASHINGTON — In its final days, the Obama administration has expanded the power of the National Security Agency to share globally intercepted personal communications with the government’s 16 other intelligence agencies before applying privacy protections.

The new rules significantly relax longstanding limits on what the N.S.A. may do with the information gathered by its most powerful surveillance operations, which are largely unregulated by American wiretapping laws. These include collecting satellite transmissions, phone calls and emails that cross network switches abroad, and messages between people abroad that cross domestic network switches.”

“WASHINGTON — In the Obama administration’s last days, some White House officials scrambled to spread information about Russian efforts to undermine the presidential election — and about possible contacts between associates of President-elect Donald J. Trump and Russians — across the government. Former American officials say they had two aims: to ensure that such meddling isn’t duplicated in future American or European elections, and to leave a clear trail of intelligence for government investigators.…

As WikiLeaks was pushing out emails stolen from the Democratic National Committee through online publication, American intelligence began picking up conversations in which Russian officials were discussing contacts with Trump associates, and European allies were starting to pass along information about people close to Mr. Trump meeting with Russians in the Netherlands, Britain and other countries.”

7. The New York Times, February 9, 2017: Flynn Is Said to Have Talked to Russians About Sanctions Before Trump Took Office

“WASHINGTON — Weeks before President Trump’s inauguration, his national security adviser, Michael T. Flynn, discussed American sanctions against Russia, as well as areas of possible cooperation, with that country’s ambassador to the United States, according to current and former American officials.…

But current and former American officials said that conversation — which took place the day before the Obama administration imposed sanctions on Russia over accusations that it used cyberattacks to help sway the election in Mr. Trump’s favor — ranged far beyond the logistics of a post-inauguration phone call. And they said it was only one in a series of contacts between the two men that began before the election and also included talk of cooperating in the fight against the Islamic State, along with other issues.”

8. The Washington Post, March 2, 2017: “… The Wall Street Journal, following The Post’s report, added that ‘U.S. investigators have examined contacts… Sessions had with Russian officials during the time he was advising’ Trump’s campaign. ‘The outcome of the inquiry, and whether it is ongoing, wasn’t clear,’ per Carol E. Lee, Christopher S. Stewart, Rob Barry and Shane Harris. ‘The contacts were being examined as part of a wide-ranging U.S. counterintelligence investigation into possible communicationsbetween members of Mr. Trump’s campaign team and Russian operatives.’ ”

Meanwhile, The New York Times has removed the word “wiretapped” from the headline of a pre-inauguration story on data being used by the federal government to investigate aides to President Donald Trump, WorldNetDaily reported.

The move comes “after Trump charged his campaign headquarters was wiretapped by the federal government, drawing criticism from longtime federal employees and Democrats.”

The Times changed its headline from “Wiretapped data used in inquiry of Trump aides” to “Intercepted Russian communications part of inquiry into Trump associates.” The text of the story still includes the term “wiretapped.”