The attorney for several Jan. 6 detainees said video shows an individual who “is clearly a law enforcement officer” handing out weapons to protesters near the U.S. Capitol “tunnel.” 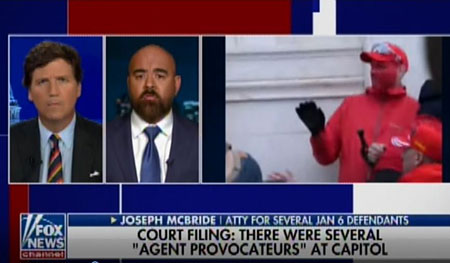 “Let me just call one of these people out. Someone who was tagged on the Internet by ‘Sedition Hunters’ as Red-Faced 45,” McBride said. “This is someone who is dressed in Trump gear, in MAGA gear. He’s covered in gear from head to toe. His face is painted MAGA red. He has a Trump hat on a Make America Great Again hat. Yet, he is clearly a law enforcement officer.”

The individual, McBride continued, “interacts with uniformed personnel. He interacts with agents in the crowd. He passes out weapons, sledgehammers, poles, mace. Some of those things come in contact with some of the other protesters who have subsequently been charged with possessing dangerous weapons and are using dangerous weapons at the Capitol.”

McBride added: “That is clearly entrapment. That is clearly the government creating conditions of dangerousness and entrapping members of the crowd to possess weapons and possibly use them for reasons that we cannot comprehend.”

Meanwhile, Jessica Watkins, a Jan. 6 detainee who said she has been held for nearly a year, noted in court documents shared with The Gateway Pundit: “The reality of January 6th has yet to be fully appreciated by the American public.”

Watkins, a former Army Ranger and veteran of the Afghanistan war, said Jan. 6 “was not one single protest, but three separate events. The first event is the speech given by our President at the Ellipse. The second is the rally at the Capitol Building on the East Side. The third, is the infamous scene from the West Side of the Capitol Building. The first was calm. The second, virtually entirely peaceful. The third was the infamous scene now known incorrectly as ‘The Insurrection’, an unfounded, improper colloquialism adopted by Left Wing media.”

Watkins wrote that she has seen videos “yet unavailable to the public” and “can attest to the improper responses of Police that led to the spiral of events that culminated in a riot. Indeed, January 6th amounts to little more than a riot that was ultimately incited by Police. The media draws much attention to the ‘deadly nature’ of January 6th, but glosses over the reality that 4 protesters were killed as a result of the Police responses.”

Watkins continued: “People were pushed off balconies, protesters shot in the face with rubber bullets, women and elderly beaten, teargas and flashbangs thrown into a peaceful crowd. Roseanne Boyland was savagely beaten to death and trampled by Police. Ashli Babbitt was murdered in cold blood by an Officer lying in ambush. I consider myself fortunate to have never witnessed these events, for I was on the East Side of the Capitol, and these tragedies transpired unbeknownst to me. My fellow inmates however were not so lucky, and the scars of PTSD are readily visible amongst them.”

Attorney: Law enforcement officer passed out weapons to Jan. 6 protesters who were later arrested added by Editor Two on December 7, 2021
View all posts by Editor Two →