ATMs in Canada to require correct responses to political questions

Under orders from the Supreme Chancellor of the People’s Republic of Canada Justin Trudeau, all bank ATMs across the provinces will now require anyone attempting to withdraw money from their accounts to take a small quiz on their political beliefs. … 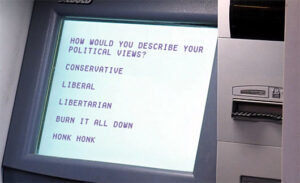 Questions asked by the ATM will include:

According to sources, anti-mandate freedom protestors have already formed their own parallel economy trading in beaver pelts, maple syrup, and Bitcoin.

ATMs in Canada to require correct responses to political questions

ATMs in Canada to require correct responses to political questions added by Editor One on February 22, 2022
View all posts by Editor One →