In a deal said brokered by Russia, Syrian President Bashar Assad’s forces have taken over frontline positions from a U.S.-backed militia in northern Syria. 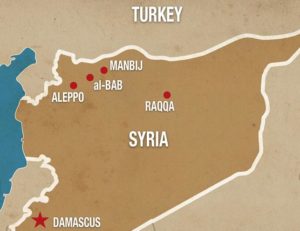 “The handover has taken place..,” Sharfan Darwish, the spokesman for the Manbij Military Council, told Reuters, adding that around five villages were included in the deal.

The villages west of Manbij have been a focus of fighting between Turkish-backed rebels opposed to the Syrian government and the Manbij Military Council, which includes the powerful Kurdish YPG group.

Turkey has said its campaign in Syria is aimed at driving Islamic State (ISIS) from its border and preventing YPG expansion in the area. Turkey regards the YPG as an extension of the Kurdistan Workers’ Party (PKK) that is waging an insurgency against Ankara.

The U.S.-allied militia said last week it would hand back to Syria control of villages on a front line where it has been fighting the Turkish-backed rebels.

That followed an agreement with Russia to pre-empt an attempt by Turkish-led forces to take Manbij, Reuters reported.