On May 14-15, the People’s Republic of China (PRC) hosted the Belt and Road Forum for International Cooperation. The Beijing meeting attracted 29 heads of state (including Russian President Vladimir Putin) and representatives of 130 other countries (including the U.S.), plus the leaders of 70 international organizations, including UN Secretary-General António Guterres.

Chinese President Xi Jinping gave the keynote address heralding the “One Belt, One Road” initiative (BRI) as a top priority. And well it should be, given that its goal is nothing less than to establish Chinese preeminence (even hegemony) over Eurasia and Africa. 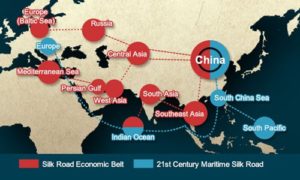 The plan envisions two axis of advance for Chinese economic and political influence. The Silk Road Economic Belt, first proposed by President Xi in 2013, will develop land routes westward from China across Central Asia to Europe and the Middle East. The 21st Century Maritime Silk Road will connect China’s coastal industries by sea to Europe and Africa, building ports along the way across the Indian Ocean. It’s globalization with Chinese characteristics meant to encompass half the world’s population.

Most commentators have looked at China’s need to find new outlets for its heavy industries to maintain employment, a key source of domestic stability. In the BRI vanguard is a massive infrastructure program across underdeveloped areas. China may put $4 trillion into the construction of roads, bridges, railways, sea and airports, communications and energy systems across foreign territory. The lure is almost irresistible to poor countries that have neither the skills nor money to create the core networks needed to become modern societies. The Asian Development Bank estimates there is an annual need for $1.7 trillion in new infrastructure. China wants to do the work.

In contrast, the U.S. Congress seems unable to muster the effort to rebuild the infrastructure of its own country despite the urging of President Donald Trump.

There is, of course, more to the BRI than economics. That is why the American delegation to the Beijing meeting was led by Matthew Pottinger, the National Security Council senior director for East Asia.

Beijing’s aims are obviously strategic, not just commercial. This can be seen in how the BRI is actually playing out. Though it envisions an eventual Chinese reach across more than half the globe (the end point of the Silk Road in Europe is Rotterdam), it has focused its first steps on strengthening the development of allies. Pakistan is an example.

In a May 15 column in the Chinese Communist Party newspaper Global Times, Muhammad Shahbaz Sharif, chief minister of Punjab Province, expressed his “pleasure” at being in China for the BRI conference.

He stated, “We see two trends emerging on the global stage; regions that are talking of isolationism and regions that are embracing global cooperation and greater connectivity.” In the first category, he meant the West while casting China as the leader of the second trend. “The fruits born of such connectivity are indeed manifold, as they emanate from the idea of a ‘shared destiny'”, he argued. He told of how “thrilled” he was with the “shared destiny” concept as presented to him by members of the Chinese Communist Party. He describes the China-Pakistan Economic Corridor as an “international benchmark” for the BRI and called on readers to “Come and see the highways from the rooftops of the mighty Himalayas to the vast lands of Balochistan and the port of Gwadar at the mouth of the Strait of Hormuz.”

His references all have strategic value: transportation networks to better deploy troops on the Indian border, or to suppress unrest in Balochistan. And the reference to a major naval base near the entrance to the Persian Gulf needs no further elaboration.

Sri Lanka is another example of how Chinese aid and infrastructure projects have given it an edge in an island just off the coast of India; Beijing’s great rival and the common enemy that brings China and Pakistan together. India and Sri Lanka have cultural and religious ties that go back thousands of years, but it was China that provided the military aid that finally crushed the Tamil insurgency in 2009. It has since poured billions into Sri Lankan development, in particular at the ports of Hambantota and Colombo; though it has also worked on airports, telecommunications and railroads. While India is still Sri Lanka’s largest trading partner, China is closing the gap, and is by far the largest investor in the island. India is fighting back, granting funding to new construction projects and expanding credits from its Export-Import Bank. India has also refused all inducements to “partner” in the BRI, rightfully seeing this plan for “cooperation and connectivity” as cover for good old-fashioned imperialism.

New Delhi did not send anyone to the Beijing meeting, and its External Affairs Ministry said that India could not accept any project that violates its sovereignty and territorial integrity.

Sri Lanka has been trying to balance its relations with the two major Asian powers. Just before Prime Minister Ranil Wickremesinghe left for the BRI meeting in Beijing, his government refused a Chinese request for a submarine to resupply at Colombo (on its supposed trip to patrol against Somali pirates).

The last time a Chinese submarine docked at Colombo was in 2014 and it provoked a strong Indian protest. India and Sri Lanka have a 1987 agreement that their territories will not be used for activities deemed “prejudicial” to each other’s unity, integrity and security. While Sri Lanka and China have held small “anti-terrorism” training exercises (one held in 2015 was codenamed “Silk Road Cooperation”), the docking of a submarine goes too far. It opens the door to a possible Chinese naval presence or even the establishment of a naval base that would pose an unacceptable threat to India.

China and India are also competing in Africa, an area where Indian business interests have a much longer history thanks to the enlightened influence of the British Empire towards trade and development on the continent. However, China can now bring more capital and state-backing to the contest, riding the waves made from its huge trade surpluses with America and Europe.

Indeed, it is the unprecedented transfers of wealth, industrial capacity and technology from the West to China that has made the BRI possible as the next phase of Beijing’s rise to overthrow the West. No wonder President Xi in his keynote address denounced “protectionism” since that would close the door to Chinese economic expansion. He meant, of course, protectionism elsewhere, as China remains one of the most mercantilist nations on the planet; a model of state-capitalism that has once more proven its worth.

It will be interesting to see what the U.S. delegation to Beijing learned from the proceedings. President Trump agreed to send people to the BRI meeting as part of the bundle of deals made during the 100-Day Action Plan of the U.S.-China Comprehensive Economic Dialogue.

China was keen about American participation as a sign of legitimacy, but I suspect the U.S. mission was intelligence gathering. The Trump administration includes a number of seasoned experts who understand that international economics is part of geopolitics and has been a major factor in China’s rise as a challenger to American preeminence. There is nothing in the BRI to dispute this view and much that should strengthen those who want action taken to end the asymetrical advantages Beijing has been enjoying. The 100-day “consensus” on minor testing-the-waters market opening issues n agriculture, financial services, investment, and energy left untouched the larger issues that have weakened the U.S. in the rivalry with China.

There is more than just the abysmal $347 billion trade deficit in goods to redress.

Washington must move beyond rallying allies to oppose China’s militarization of the South China Sea to create a broader alignment to counter the BRI with a development plan built on sounder, more mutually beneficial principles than anything a Communist regime can offer. The United States and its allies have far more resources to deploy than does China and more practical experience in how to do so profitably.

The balance of power has not shifted in Beijing’s favor. And it won’t if Americans can muster the same enthusiasm for “winning” as is being displayed in Beijing.