Kyle Rittenhouse is currently enrolled as an online student at Arizona State University but has expressed interest in attending classes in person at ASU.

Several student groups at ASU, including MEChA (Movimiento Estudiantil Chicanx de Aztlán), Students for Socialism, Students for Justice in Palestine and the Multicultural Solidarity Coalition are organizing a rally this week to “get murderer Kyle Rittenhouse off [the] campus.” 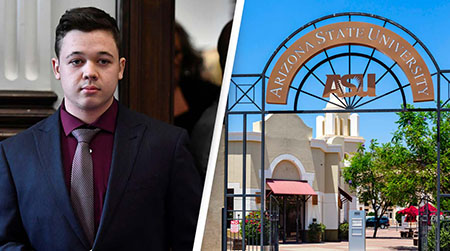 Students and faculty are being called to the rally to “protect students from a violent, blood-thirsty murderer.”

ASU student Taskina Bhuiya started a Change.org petition to denounce the not guilty verdict and to call for Rittenhouse to be “held accountable for the crimes he has committed.”

The petition declares: “ASU should be a safe and inclusive place for all students, which will be disrupted if Kyle Rittenhouse is allowed to attend this school.”

“Inclusive unless you are an acquitted individual who must be ‘held accountable,’ ” George Washington University law professor Jonathan Turley noted in a Nov. 28 op-ed.

“The campaign reflects a growing sense that the legal system is only worthy of respect (or even protection) if it rules in the way that we demand,’ Turley wrote. “It is the same mentality that has led members of Congress, law professors, and others to demand the expansion or restriction of the Supreme Court because it now has a conservative majority. Liberal justices like the late Justice Ruth Bader Ginsburg and Justice Stephen Breyer have opposed such efforts as inimical to the rule of law.”

A similar campaign was launched to block Nick Sandmann from attending Transylvania University.

“Some media outfits corrected false coverage of Sandmann, who was wrongly accused of racist attacks on a Native American activist,” Turley noted. “Various media companies settled with him and he is still in litigation with others. Yet, figures from an ACLU officer to a professor raised the alarm over his attending college and appearing on campus.”

Rittenhouse “has every right to attend ASU in person and has every right to expect that he can do so safely,” Turley noted. “If ASU cannot muster the integrity and courage to reaffirm those rights publicly, it has abandoned a core defining element for higher education. Colleges often sit in cringing silence as individual students are targeted and harassed. Students have every right to protest, but ASU must be clear and public in supporting Rittenhouse’s right to access to an education on its campuses.”