With its massive Build Back Better spending plan shelved, Team Biden turned to so-called “election reform,” which in reality is the Democrat Party’s attempt to give the federal government unprecedented control over U.S. elections.

“If we can get the congressional voting rights done, we should do it. … There’s nothing domestically more important than voting rights,” Joe Biden said on Wednesday. 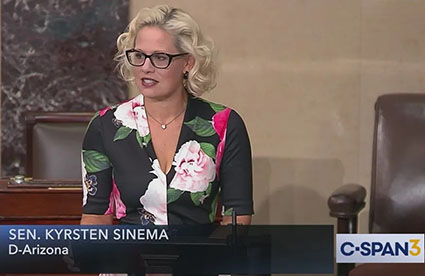 Sinema stated she will protect the 60-vote filibuster threshold. Fifty Senate votes are needed to end the filibuster. If the filibuster is terminated, a simple majority vote could be held to change election laws.

Sinema’s spokesman John LaBombard told Politico that she “continues to support the Senate’s 60-vote threshold, to protect the country from repeated radical reversals in federal policy which would cement uncertainty, deepen divisions, and further erode Americans’ confidence in our government.”

The ridiculously-named “For the People Act” legislation (H.R. 1), which passed the House in March on a 220-210 party-line vote, would make permanent many of 2020’s pandemic-centric election laws.

If the 2020 rules aren’t applied in 2022, Democrats are nearly certain to lose control of Congress.

Democrats who see the writing on the wall are now in panic mode, protesting that failure to pass their “election reform” will result in the end of democracy in the United States.

“I don’t want to become too dramatic,” Missouri Democrat Rep. Emanuel Cleaver told Politico on Thursday, “but voting rights may be the only thing we have to at least halt the trek away from democracy.”