Are Murdoch’s media setting the stage for President Trump’s indictment?

Rumors of a possible criminal indictment of former President Donald Trump continue to circulate through The Swamp. Leftist legacy media feed such rumors to their limited but faithful audience. NBC’s July 26 interview with Attorney General Merrick Garland, excerpted below, is one example.

As for the larger audience, those who devour Rupert Murdoch-owned media on a daily basis are being fed the same Swamp gruel it appears. 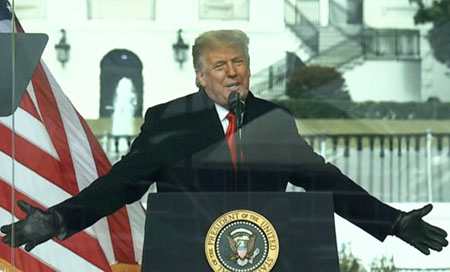 The New York Post, Wall Street Journal, and Fox News — all Murdoch properties — are doing nothing to rule out the possibility of a Trump indictment as indicated by recent coverage.

The New York Post on July 22 ran an editorial headlined “Trump’s silence on Jan. 6 is damning”.

On the same day, the Wall Street Journal, on its editorial page, went with the headline “The President Who Stood Still on Jan. 6”.

Both editorials claimed that Trump did nothing to stop his supporters from “rioting” at the U.S. Capitol on Jan. 6, 2021.

Both are factually incorrect, The American Spectator’s Jeffrey Lord noted.

“Let’s start with the White House rally on January 6 which preceded the events at the Capitol. As I have mentioned before, I had a literal front row seat at that rally. I quite distinctly heard President Donald Trump, standing mere yards from me, tell his supporters to march ‘peacefully and patriotically’ to the Capitol,” Lord wrote.

The Capitol was breached at 2:13 p.m. At 2:38 p.m., Trump tweeted: “Please support our Capitol Police and Law Enforcement. They are truly on the side of our Country. Stay peaceful!”

Which, Lord noted, “is to say a mere 25 minutes after the Capitol was breached — not 187 minutes, as the January 6 Committee lies — Trump asked his supporters to ‘stay peaceful’ — for the second time — and added a request to “Please support our Capitol Police and Law Enforcement. They are truly on the side of our Country.”

The Wall Street Journal claimed in its July 22 editorial: “Trump took an oath to defend the Constitution, and he had a duty as Commander in Chief to protect the Capitol from a mob attacking it in his name. He refused. He didn’t call the military to send help.”

John Solomon noted in the report: “The Pentagon first raised the possibility of sending National Guard troops to the U.S. Capitol four days before” Jan. 6, “setting in motion a series of rejections by Capitol Police and Democrats that left Congress vulnerable as threats of violence were rising, according to government memos that validate Trump administration officials’ long-held claims.”

In its July 22 editorial, the New York Post claimed: “What matters more — and has become crystal clear in recent days — is that Trump didn’t lift a finger to stop the violence that followed.”

Lord responded: “Say what? Say again, anticipating a problem four days before January 6 according to the Capitol Police timeline proves exactly that Trump authorized the deployment of 10,000 to 20,000 National Guard troops quite specifically in case there was violence. There it is in black and white. It is, to borrow from the Post, ‘crystal clear’ that Trump authorized thousands of troops to stop any violence.”

Lord added: “There are too many facts out there on the record — say again on the record — about exactly what Trump did and said both on January 6 and in the days leading up to that day that starkly disprove these two editorials.”

Power resides at the U.S. Department of Justice. Attorney General Merrick Garland granted an exclusive interview with NBC’s Lester Holt on July 26, 2022. Following is an excerpt:

“The indictment of a former president, and perhaps a candidate for president, would arguably tear the country apart,” Holt said. “Is that your concern as you make your decision down the road here, do you have to think about things like that?”

Garland replied: “We intend to hold everyone, anyone who was criminally responsible for the events surrounding Jan. 6, for any attempt to interfere with the lawful transfer of power from one administration to another, accountable. That’s what we do. We don’t pay any attention to other issues with respect to that.”

Holt followed up, asking whether, if Trump were to become a candidate for president again, “that would not change your schedule or how you move forward or don’t move forward?”

Garland responded: “I’ll say again that we will hold accountable anyone who was criminally responsible for attempting to interfere with the transfer, legitimate, lawful transfer of power from one administration to the next.”

Trump’s speech at the AFPI summit, organized by former senior officials in his administration, was the first time the former president had been in Washington D.C. since the Team Biden was installed.

Others noted that Fox News ran roughly six hours of the Select Committee’s sham hearing but did not air Trump’s speech.

Trump said in a July 27 statement: “People forget, this is all about a Rigged and Stolen Election. But rather than go after the people that Rigged and Stole it, they go after the people that are seeking Honesty and Truth, and have Freedom of Speech, and many other defenses, on their side! Justice Department should look at The Crime of the Century. Evidence is massive and irrefutable!!!”

Are Murdoch’s media setting the stage for President Trump’s indictment? added by Editor Two on July 27, 2022
View all posts by Editor Two →