The judge in the Kyle Rittenhouse trial on Thursday banned MSNBC from the courtroom after the “news” outlet’s operatives were caught following the Rittenhouse jury bus in an apparent effort to intimidate and dox them.

The Kenosha Police Department released on Twitter an incident on Wednesday night in which police arrested and ticketed a man they suspected was attempting to snap photographs of the Rittenhouse jury. 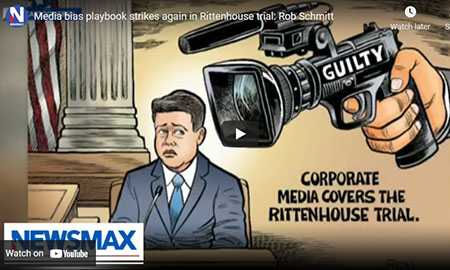 “Last night a person who is alleging to be affiliated with a national media outlet was briefly taken into custody and issued several traffic related citations. Police suspect this person was trying to photograph jurors. This incident is being investigated much further,” police said. “There was no breach of security regarding the jury, nor were there any photographs obtained. This investigation remains active and open.”

Judge Bruce Schroeder had scolded the media on Wednesday: “When I talked about problems with the media, when this trial started, we were there in part — not fully but in part — because of grossly irresponsible handling of what comes out of this trial.”

“I will tell you this,” Judge Schroeder continued, “I’m going to think long and hard about live television at trial again next time.” He explained that he’d “always been a firm believer in [live coverage] because the people should be able to see what’s going on, but what I see, what’s being done, it’s really quite frightening. Frightening, that’s the right word for it.”

Anyone who has been following the trial of Kyle Rittenhouse knows there is a significant difference between the reality presented in the courtroom and what Big Media is feeding Americans.

“The firehose of uninformed criticism from the mainstream media has not just been directed at Kyle Rittenhouse, either, as Judge Schroeder has been blasted by the media for a litany of baseless accusations,” TownHall.com’s Spencer Brown noted. “Apparently, a potential acquittal will be the fault of the judge in the case, and not the fault of the jurors who decided the case nor the clown of a prosecutor who struggled to make a case at all.”

Media: Why do reporting when we already know Rittenhouse is a terrorist? pic.twitter.com/abebdPyiIs

In her Common Sense blog on substack, Bari Weiss detailed “why so many got this story so wrong.”

“Here is what I thought was true about Kyle Rittenhouse during the last days of August 2020 based on mainstream media accounts: The 17-year-old was a racist vigilante. I thought he drove across state lines, to Kenosha, Wisc., with an illegally acquired semi-automatic rifle to a town to which he had no connection. I thought he went there because he knew there were Black Lives Matter protests and he wanted to start a fight. And I thought that by the end of the evening of August 25, 2020, he had done just that, killing two peaceful protestors and injuring a third,” Weiss wrote. “It turns out that account was mostly wrong.”

Step by step, Weiss dismantled the corporate media’s narrative on the Rittenhouse case:

The idea that Kyle Rittenhouse was a white supremacist: “There was zero evidence that Rittenhouse was connected to white supremacist groups at the time of the shooting. He was a Trump supporter, yes, though he wasn’t old enough to vote. He was an admirer of police and firefighters, also true. He was a lifeguard. He’d been part of a ‘police explorer’ program, and was also a firefighter/EMT cadet with the fire department in Antioch, Illinois, where he lived with his mom and two sisters,” Weiss wrote.

That Rittenhouse had no connection to Kenosha: “In addition to having a job in Kenosha, Rittenhouse testified that much of his family lived there: his father, his grandma, his aunt and uncle, and his cousins. He also testified that on the morning of the shootings, he went downtown with his sister and friends to see the damage done by rioting the night before, and spent about two hours cleaning graffiti off of the local high school,” Weiss wrote.

That Rittenhouse drove across state lines with a gun that night to oppose the protests: “This was a line that we heard constantly — never mind that Antioch, Illinois, is about 20 miles from Kenosha, Wisconsin. As the trial has shown, Kyle Rittenhouse did not travel to Kenosha to oppose protesters. He testified under oath that he had traveled to Kenosha for his job the night before the shootings, and was staying at a friend’s house,” Weiss wrote.

What about the gun? “Rittenhouse didn’t bring the gun to Kenosha. The gun was purchased for Rittenhouse months earlier by a friend and stored in Kenosha at the home of that friend’s stepfather, as then-17-year-old Rittenhouse was too young to purchase it,” Weiss noted.

But it was illegal for him to even have the gun given that he wasn’t yet 18 years old, right? “That is not true. Under Wisconsin law, 17-year-olds are prohibited from carrying rifles only if they are short-barreled. The weapon Rittenhouse was carrying was not short-barreled. Which is why, during closing arguments, the court threw out the charge,” Weiss noted.

He was looking for a fight: He killed two people and severely wounded a third: “Unless there’s evidence we haven’t seen, there’s no clear indication that Rittenhouse sought to kill anyone. What we know is that he showed up with a first aid kit and an AR-15-style rifle. Video evidence, and Rittenhouse’s own testimony, indicates that he offered medical assistance to protestors and ran with a fire extinguisher to try to put out fires—and that later, after being pursued, he killed two people, Joseph Rosenbaum and Anthony Huber, and severely wounded a third. Both video evidence and the only living person that Rittenhouse shot that night, Gaige Grosskreutz, undermined the idea that Rittenhouse was simply an aggressor looking for a fight. During cross examination Grosskreutz acknowledged that Rittenhouse shot him only after Grosskreutz had pointed his own gun at Rittenhouse,” Weiss wrote.

That the people Rittenhouse shot were heroes defending the rights of black Americans: Weiss said that narrative is destroyed in the following video of Joseph Rosenbaum: