Ed Buck, a major donor to the Democrat Party, was sentenced on Thursday to 30 years in prison for drug and sex crimes that included providing lethal doses of methamphetamine to two men.

For years, the 67-year-old Buck had lured young black men, most of them either homeless, addicted, or sex workers, into what he called “party and play” sessions at his West Hollywood, California apartment.

A jury convicted Buck last year on a host of felony counts, including distributing methamphetamine resulting in death and enticement to cross state lines to engage in prostitution.

The conviction marked the latest in a litany of “electronic device scandals” involving powerful U.S. government players as depicted by a graphic below produced by the Marco Polo research group.

“With Buck’s sentence of 30 years being handed down today, let’s take a trip down memory lane… the Biden Laptop is the most significant but also just the latest in a string of national embarrassments.” 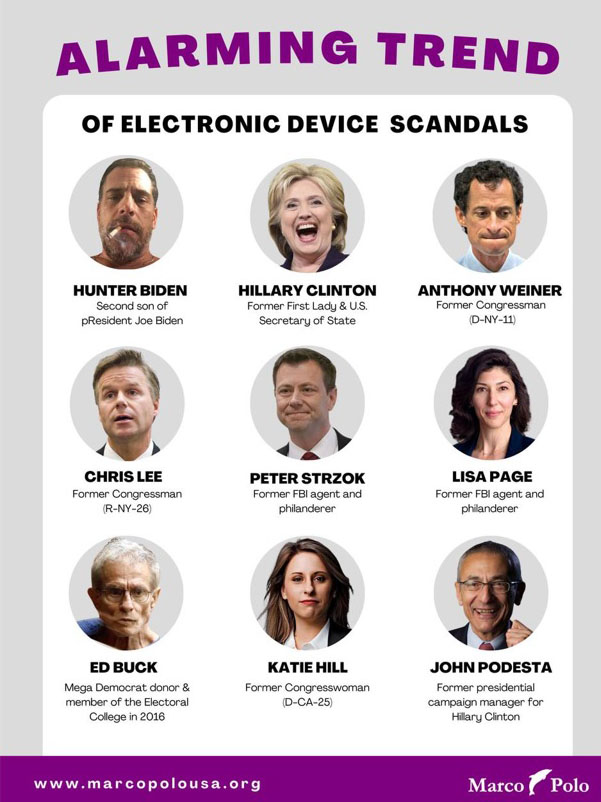 Buck’s lawyers had asked that he receive a sentence that would one day allow him to return to society. Prosecutors urged U.S. District Judge Christina A. Snyder to send Buck to prison for the rest of his life.

“If Buck were ever released,” the prosecutors wrote, “he would feed his compulsion to inject others until the day he died.”

During his trial last year, several men testified that Buck would offer them extra money if they “slammed,” or allowed him to inject them with methamphetamine.

Buck’s West Hollywood apartment was littered with drug paraphernalia and sex toys, and Buck treated the men “like lab rats in his twisted experiments,” according to a sentencing memo.

Once the men he drugged were unconscious or immobile, Buck sexually assaulted them, choked them, and slapped them, according to trial testimony.

Buck filmed many of the episodes. In a video played at trial, he gave stage directions to a masked man who was smoking methamphetamine: “Stare directly into the camera, flare your nostrils and blow it out slowly. Now, if you add wide-open eyes to that, it would be a perfect shot.”

Two men died in Buck’s apartment. Their bodies were found in near-identical circumstances.

Gemmel Moore, 26, flew in from Texas on July 27, 2017, on a ticket that Buck had purchased. Hours later, he was dead. A coroner’s investigator found Moore lying on a mattress with pornography playing on the television. Syringes, pipes, sex toys and methamphetamine were found throughout the apartment.

“This is so dark,” Cory McLean, Moore’s friend, said as he addressed Buck at Thursday’s sentencing hearing. “No one could even fathom that this was real, this was true. And you created it.”

Timothy Dean, a former basketball player who worked as a fashion consultant at Saks Fifth Avenue, went to Buck’s apartment on Jan. 7, 2019. Within an hour, he had overdosed, Chelsea Norell, an assistant U.S. attorney, said. Before calling 911, Buck wiped up Dean’s vomit and blood and threw syringes and pipes out of a window, according to Norell.

Authorities found Dean, like Moore two years earlier, lying on a mattress in Buck’s living room. Three large mirrors were propped up against the walls. The bottom of Dean’s feet were white, indicating he’d been dead for some time, Norell said.

It took the near-death of another man for authorities to finally arrest Buck. In September 2019, Buck injected Dane Brown with three doses of methamphetamine. Brown managed to stagger out of Buck’s apartment to a nearby gas station, where he called 911.

Buck was arrested a week later.

“Buck does not value human life beyond his own,” Norell wrote, urging Snyder, the judge, to send him to prison for the rest of his life. “He used human beings as playthings, destroying their lives merely to appease his own sexual gratifications.

“He has killed two people and nearly a third,” she continued, “torn apart families, created and amplified debilitating addictions among the most vulnerable populations, and has done it all without an ounce of remorse.”

If Buck does not cause problems in prison, he could be released after serving 85% of his term, at which point he would be in his early 90s, Judge Snyder said.

The Daily Mail noted that “filmmakers Jayce Baron and Hailie Sahar want to be clear that Ed Buck is not an isolated case. Sadly, they say, ‘there are many more Ed Bucks out there.’ ”