The new law, which passed 66-28 in the state’s House of Representatives on Thursday, outlaws the “performance of a medical procedure or the prescription of medication, upon or to a minor child, that is intended to alter the minor child’s gender or delay puberty.” 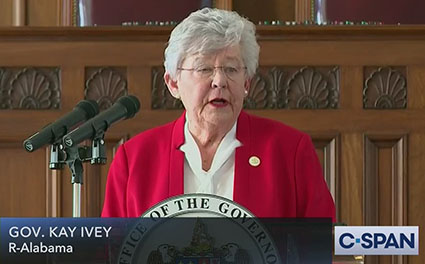 The law requires the “disclosure of certain information concerning students to parents by schools” and establishes “criminal penalties for violations.”

Alabama defines a minor as a person who is under 19 years of age.

Under the law, any individual found to have provided hormone treatment, puberty blockers, or gender-reassignment surgery to children would be charged with a felony punishable by up to ten years in prison.

The law requires schools to inform the parent or legal guardian that a child is experiencing gender dysphoria, or that the “minor’s perception of his or her gender or sex is inconsistent with the minor’s sex.” Nurses, counselors, teachers, principals, or other administrative officials at a public or private school are forbidden from encouraging or coercing a minor not to notify their parent of their child’s gender dysphoria.

The law applies to “surgeries that sterilize, including castration, vasectomy, hysterectomy, oophorectomy, orchiectomy, and penectomy” as well as those “that artificially construct tissue with the appearance of genitalia that differs from the individual’s sex, including metoidioplasty, phalloplasty, and vaginoplasty.”

Washington Times columnist Cheryl K. Chumley noted that the Alabama law is “a necessary provision to save America’s youth from the abuse of the left.”

The LGBTQ movement — which has now morphed into the LGBTQIA movement and counting — has changed from a campaign for equal rights under existing law to one of lunacy.

Children are not capable of making adult decisions on their own. That’s one of the things that makes them children — they’re immature, incapable of seeing the long term, unable to make wise decisions about their futures, unequipped with the mental capacity and life experience to analyze all sides of an issue and come to proper conclusions. They’re children.

That’s why God made adults — mothers and fathers, ideally: to protect the children, to raise the children in the ways they should go.

Taking a little girl and telling her she can become a boy if she just takes this medical treatment is abuse, pure and simple. Taking a young boy and playing into his imaginations about becoming a girl and pretending that he can indeed do so if he just goes under the surgical knife is abuse — again, pure and simple.

White House Press Secretary Jen Psaki slammed the law signed by Ivey, saying: “Alabama’s lawmakers and other legislators who are contemplating these discriminatory bills have been put on notice by the Department of Justice and the Department of Health and Human Services that laws and policies preventing care, that health care professionals recommend for transgender minors, may violate the Constitution and federal law.”

Fox New host Tucker Carlson said in response to Psaki’s statement: “So, to be clear, suddenly politicians are not allowed to tell doctors what to do. ‘What?’ you ask, ‘I’ve been in this country the last two years.’ Nope! Politicians can’t tell doctors what to do. Now, that’s the new rule. So why did that rule change? Well, because the Constitution of the United States specifically protects chemical castration of minors when it’s conducted in the name of something called trans rights. That’s a transgender amendment. You knew that. It’s a good thing you do know it, because if you were to disagree with it, Joe Biden’s Department of Justice may very well send men with guns to arrest you and don’t laugh, tempted as you may be, Jen Psaki is dead serious. She wasn’t smiling. She was as solemn as an undertaker as she read the talking points written for her by some activist group.”

Alabama bill makes it a felony to provide sex-change treatments, surgery for minor children added by Editor Two on April 10, 2022
View all posts by Editor Two →