In a strange but not unexpected twist to a world in turmoil, North Korea’s bellicose leadership has carried out a series of missile tests, not seen since 2017.  One particularly provocative firing of an intermediate range rocket flew right over Japan.  Two short range missiles were shot into the sea on the eve of U.S. Vice President Kamala Harris’s visit to South Korea and the DMZ.

As in a well-practiced drill, diplomats convened in the UN Security Council for yet additional crisis consultations. Only last month North Korea, largely unnoticed in the flurry of the Ukraine war and global food crisis, declared that it was an “irreversible” nuclear power.

The missile firings may be a prelude for the communist regime to soon carry out its seventh nuclear test. 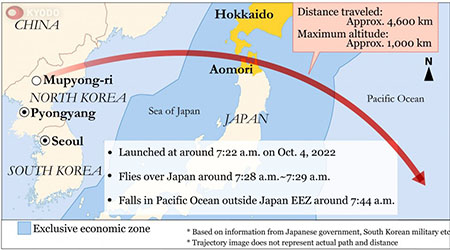 France’s delegate Nicolas de Riviere stated poignantly, “The increase in ballistic (missile) tests since the beginning of the year is unprecedented. We are witnessing a clear development of ballistic capabilities, with the stated intention of developing a tactical nuclear program.”

He added, “It would be irresponsible to reward violations of the resolutions by easing sanctions. Instead, pressure on Pyongyang must be maintained and increased in certain areas.”

UN Assistant Secretary General Khaled Khiari, told assembled delegates, “the Secretary General strongly condemns the DPRK’s launch of a long-range ballistic missile. This was a reckless act and a clear violation of relevant Security Council resolutions.” He added, “This launch risks triggering a significant escalation of tensions in the region and beyond.”

The recent  Hwasong-12 rocket firing over Japan’s Northern Hokkaido island traveled 2,800 miles before falling into the Pacific. It was the North’s first launch over the Japanese home islands since 2017.

“These launches violate multiple Security Council resolutions and pose a threat to not only the region, but to the entire international community,” the statement underscored.

As Amb. Thomas-Greenfield said earlier, “But as we all know, the DPRK has enjoyed blanket protection from two members of this Council. These two members have gone out of their way to justify the DPRK’s repeated provocations.” That’s naturally Russia and China.

The statement added, “Following the DPRK’s provocations and escalatory behavior in 2017, the Council came together and unanimously took action to hold the DPRK accountable for its unlawful actions.”

That confrontation with the then-new Trump Administration came to the brink of “Fire and Fury” warnings when the new American president called Kim’s bluff.

Though many observers thought using the refrain of “little rocket man” signaled a certain conflict, Trump soon turned the tables and made it a prelude to the historic face-to-face Singapore Summit.

That’s now been changing since early 2021. Pyongyang state run media says that its recent    missile launches were a “simulation” of a nuclear attack on South Korean and U.S. targets.

But somehow, I feel that beyond lofty geopolitical calculations, Kim Jong-Un misses an audience, where he probably relishes the role of a Bond Bad Guy. Vladimir Putin’s Ukraine war has totally shifted much of the spotlight to Europe. As for East Asia, it’s his longtime mentor in China Xi Jinping threatening Taiwan. Kim is odd man out.

Kim Jong-Un may carry out his seventh nuclear test at some point between China’s upcoming   20th Communist Party Congress (from Oct. 16) and the American mid-term Congressional Elections on Nov. 8.

After 3 years of Trump-era calm, North Korea’s ‘don’t-forget-me’ missile diplomacy returns added by Editor One on October 16, 2022
View all posts by Editor One →