A Hugo Chavez moment, north of the border

President Obama has given himself the powers to declare martial law — especially in the event of a war with Iran. It is a sweeping power grab that should worry every American.

On March 16, the White House released an executive order, “National Defense Resources Preparedness.” The document is stunning in its audacity and a flagrant violation of the Constitution. It states that, in case of a war or national emergency, the federal government has the authority to take over almost every aspect of American society. Food, livestock, farming equipment, manufacturing, industry, energy, transportation, hospitals, health care facilities, water resources, defense and construction — all of it could fall under the full control of Mr. Obama. The order empowers the president to dispense these vast resources as he sees fit during a national crisis. 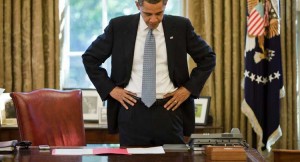 “The domestic industrial and technological base is the foundation for national defense preparedness. The authorities provided in the act shall be used to strengthen this base and to ensure it is capable of responding to the national defense needs of the United States.”

In short, the order gives Mr. Obama the ability to impose martial law. He now possesses the potential powers of a dictator. The order is a direct assault on individual liberties, private property rights and the rule of law. It is blatantly unconstitutional.

The executive branch is arrogating responsibilities precluded by the Constitution without even asking the permission of Congress. The order gives Mr. Obama a blank check to erect a centralized authoritarian state. This is a law one would expect to find in Hugo Chavez’s Venezuela or Vladimir Putin’s Russia.

The backdrop to the executive order is the looming showdown with Iran. The administration says the “window for diplomacy is closing.” Defense Secretary Leon E. Panetta warned Teheran’s mullahs that “all options are on the table” — including military intervention. Mr. Obama stresses that his patience is running out. He vows that Iran will not acquire the bomb. Mr. Obama wants several more months for sanctions and international isolation to bring the ayatollahs to heel. Yet the signals are clear: Mr. Obama may be ready to launch devastating airstrikes on Iranian nuclear facilities.

If that should happen, Iranian President Mahmoud Ahmadinejad has promised massive retaliation. American troops will be targeted by Iranian proxies in Iraq and Afghanistan. American embassies will be struck across the Middle East and North Africa. Most ominously, Iranian-backed Hizbullah cells could launch devastating terrorist attacks in major U.S. cities, killing numerous citizens. The war may well come home, triggering domestic chaos. These are the very real risks of a major conflict with Iran.

Which begs the question: Would that tempt Mr. Obama to claim a state of emergency and thereby implement his executive order? No one knows the answer. And we shouldn’t have to find out.

The president does not — and should not — have the authority to subordinate the entire private economy to the government, especially without the consent of Congress and the American people. It is national socialism masquerading as military security.

This is why conservatives — those who are serious about defending our constitutional republic — should demand that the executive order be repealed immediately. Liberals argue that President Clinton issued a nearly identical mandate. President Franklin D. Roosevelt signed the first national defense resources preparedness order, which has been amended by successive presidents, including George W. Bush. Hence, according to the progressive left, if it was good enough for FDR, Mr. Clinton and Mr. Bush, why not Mr. Obama?

The answer is simple: Because the Constitution matters — or at least it should. For more than 70 years, liberal Democrats and corporatist Republicans have been slowly dismantling the old republic, imposing a creeping social democracy.

The Founding Fathers’ vision of limited government and federalism has been replaced by a new ruling class. FDR, Mr. Clinton, Mr. Bush — all of them were militarists expanding the size and scope of government. They were Wilsonian globalists, and they shamelessly violated civil liberties. FDR was the worst, by forcing Japanese-Americans into internment camps.

Mr. Obama’s executive order represents the culmination of the welfare-warfare state. He is walking in the footsteps of his predecessors, those who enabled the rise of the imperial presidency. And it leads to only one tragic end: the gradual deterioration of our democracy.