Team Biden’s National Security Council (NSC) should not endorse an announcement officially ending the Korean War that does not include a denuclearization commitment from North Korea or protect U.S. assets in the region, 35 members of the U.S. Congress said in a joint letter to the Biden administration. 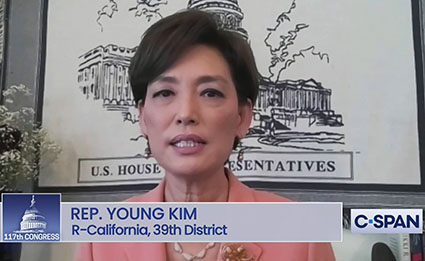 South Korean leftist President Moon Jae-In is seen as attempting to use the end of the war announcement as leverage to resume talks with the North.

North Korea and its ally China, however, see the announcement as an opportunity to end joint U.S.-South Korea military drills and call for the withdrawal of U.S. forces from South Korea, critics say.

“A one-sided announcement of the end of the Korean War will bring catastrophic results to the security of the Indo-Pacific region,” California Republican Rep. Young Kim, one of the 35 to sign the letter, said in an interview with The Dong-A Ilbo on Tuesday. “(A one-sided announcement) will weaken the war deterrence power of the Korea-U.S. alliance and put the lives of tens of millions of Americans, South Koreans, and Japanese at risk.”

The draft for the announcement of the end of the Korean War is in the final stage in coordination between South Korea and the U.S.

Rep. Kim said Congress is highly concerned about the quick progress of discussions on the announcement without consultation with Congress.

“We should deal with North Korea that we are facing, not the one we are hoping for,” Kim said. “The announcement of the end of hostilities will come through dialogues after the North removes its nuclear weapons and shows verifiable progress on the compliance of sanctions and human rights improvement.”

According to Kim, a reply to the joint letter sent to the White House hasn’t been received yet.