Three more House Democrats on Monday hinted they will not seek re-election in 2022, bringing the total number of Democrats retiring or bidding for another office to 23.

Reps. Stephanie Murphy of Florida, Lucille Roybal-Allard of California, and Albio Sires of New Jersey are the latest Democrats to say they plan on retiring. 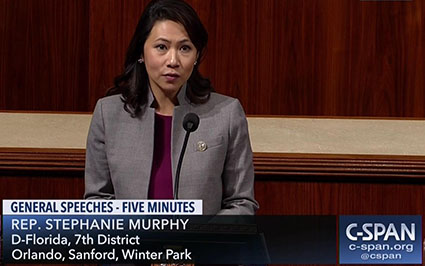 Most political analysts believe a Red Wave will return control of the House to Republicans in next year’s midterms if the elections are free of serious irregularities and fraud.

“House Democrats are running for the exits so fast they might set a new land speed record,” said Congressional Leadership Fund Communications Director Calvin Moore. “But who can blame them? With crises on every front, Democrats see the writing on the wall and know their days in the majority are soon coming to an end.”

Murphy, 44, announced her decision not to seek a fourth term on Twitter: “I’ve decided not to seek another term in Congress. Serving Central Florida has been the honor of my life, but it’s also been incredibly challenging for my family and me. This was not an easy decision, but it is the right decision. Thank you for everything.”

Sires, 70, is expected to announce his retirement formally at the end of the year, reported the New Jersey Globe. He has represented the state’s 8th Congressional District since 2006.

Roybal-Allard, 80, has not officially announced her retirement but told two close sources she plans to not seek re-election in 2022, The Hill reported. She has served in the House since 1993 and chairs the powerful Homeland Security Appropriations subcommittee.

National Republican Congressional Committee Mike Berg said in a statement: “House Democrats’ nightmare before Christmas just keeps getting worse. Nobody wants to run as a Democrat because they know voters are rejecting their push for defunding police, higher taxes, and open borders.”

Only 11 House Republicans to date have announced they will be retiring or seeking another office in 2022.