From where Winston stood it was just possible to read, picked out on its white face in elegant lettering [on the Ministry of Truth], the three slogans of the Party:

The White House is defending the creation of the Department of Homeland Security’s Disinformation Governance Board to combat “disinformation” and “misinformation.” Team Biden’s selection to head up what amounts to its Ministry of Truth is Nina Jankowicz, who has proven to be quite skilled at disseminating both.

White House Press Secretary Jen Psaki on Thursday said: “It sounds like the objective of the board is to prevent disinformation and misinformation from traveling around the country in a range of communities. I’m not sure who opposes that effort.”

That would be the First Amendment.

Fox News’s Tucker Carlson noted: “You are a free person in a free country and no law enforcement agency can ever tell you what to think or say, period.”

Psaki, meanwhile, told reporters she was unsure of who the individual is that was chosen to head the Disinformation Governance Board and did not have “any information” related to Jankowicz to discuss. (Hard to fathom for a press secretary given that Jankowicz was a top news item in almost all press since Wednesday’s announcement of the board.)

Jankowicz in the past has:

Meet your new head of the Homeland Security Disinformation Governance Board, America pic.twitter.com/l1s9BtJ6DO

DHS head of the Disinformation Governance Board pic.twitter.com/XrWhYaIPF3

This is the new head of Biden’s Homeland Security Disinformation Governance Board pic.twitter.com/BqGhIaBdKR

Writing for Ricochet, Jon Gabriel noted: “Nina Jankowicz’s job isn’t to root out misinformation or disinformation. It is to call common-sense ‘lies’ and replace it with ever more complex deceptions. Politicians, academia, and the media can’t define ‘truth’ and have no need for a definition anyway. Their goal is power and they will twist facts however needed to obtain it. They have exchanged the truth for a lie and every honest person knows it.”

The new fight for freedom kicked off when Elon Musk first announced he intended to buy Twitter.

Globalists pushing the Great Reset and their American leftist comrades were sent into a state of shock.

Washington Post reporter Max Boot spoke for all of them when he tweeted: “I am frightened by the impact on society and politics if Elon Musk acquires Twitter. He seems to believe that on social media anything goes. For democracy to survive, we need more content moderation, not less.”

The European Union last weekend moved on new legislation intended to “protect” Europeans from the hate speech and disinformation they may encounter on social media platforms with the so-called Digital Services Act. The EU legislation will impose hefty fines on companies that fail to monitor and remove dangerous and provocative content posted by users of their websites.

EU Commission Vice President Margrethe Vestager said, “with today’s agreement we ensure that platforms are held accountable for the risks their services can pose to society and citizens.”

It didn’t take long for Team Biden to follow suit, as DHS chief Alejandro Mayorkas announced the creation of the Disinformation Governance Board on Wednesday.

Conservative political commentator and media host Steven Crowder pointed out in a tweet that the Nazis had done something similar.

The government is creating a misinformation governance board. Who else did something like that? Oh I remember, the Nazi’s. And there’s some data showing some interesting things going on post-@elonmusk’s Twitter takeover!

Musk responded to Crowder with one word: “Discomforting”.

Musk on April 27 had pointed out that former President Donald Trump’s social media platform, TRUTH Social, was number one in free downloads on the app store.

Trump, meanwhile, posted for the first time on TRUTH Social on Thursday. 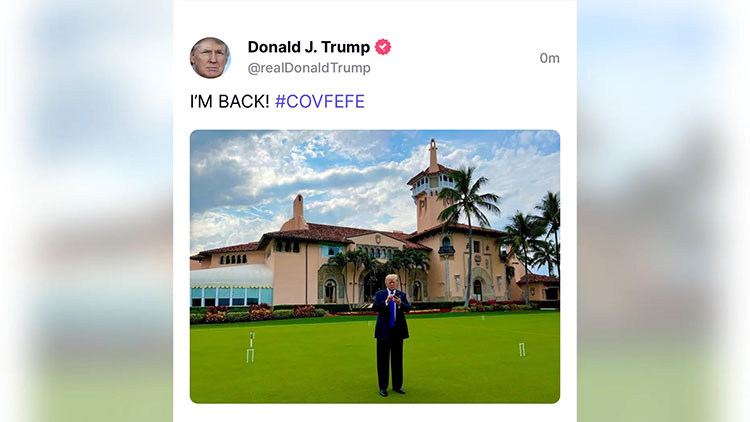 “I am not going on Twitter, I am going to stay on TRUTH,” Trump told Fox News. “I hope Elon buys Twitter because he’ll make improvements to it and he is a good man, but I am going to be staying on TRUTH.”

In all the brouhaha about Elon Musk, the name Donald J Trump has been missing in action. But wasn’t he the sole reason for the massive reaction formation by the Left and its media, notably Twitter? And does he not continue to be the Number One threat to Big Tech as demonstrated by the current commercial appeal of TRUTH Social?