What is happening on the streets of major cities across America, the looting, the destruction, the violence. “This is the Democrat Party,” radio host Rush Limbaugh said.

“Antifa is simply a new name for all of these left-wing, Democrat Party aligned and sponsored protest groups going back to the sixties,” Limbaugh said on his June 2 broadcast. 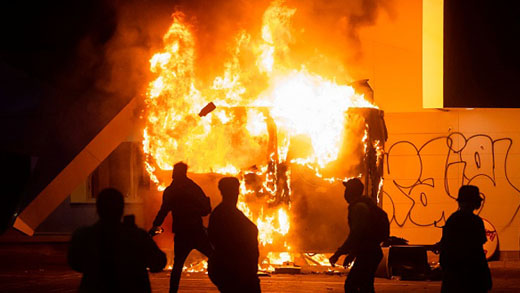 “You had the Weathermen. He had the SDS, Students for Democrat Society. I can’t even think of all the names. Antifa is Occupy Wall Street. It’s Black Lives Matter. They’re all the same people and thinking under different names. They have different organizations for the purposes of fundraising.”

Washington Times columnist Cheryl K. Chumley made a similar point on June 3: “The violence taking place on America’s streets right now, and for the past few days, wouldn’t be — that’s to say, there wouldn’t be any — except for one small teeny-weeny bitty bit of fact: Democrats want it. Democrats love the chaos.”

“Rage was used to intimidate, that they arrived on campus enraged in anger. It was their daily existence. It was the way they got their way. It was the way they intimidated. And they showed up angry. And the rage was due to being mistreated, being discriminated against because of being a minority, female, Hispanic minority, what have you. Much of it’s out of the Alinsky handbook, actually. But it’s all Marxist, folks, and it is all studied. It’s all practically applied. None of this is random. None of this is something happens and these people see it and they get mad and take to the streets. They are waiting. They are programmed. They are waiting for the call to action.

“It’s not that George Floyd was murdered; it’s that somebody was at the hands of a cop, and that’s the go signal. They are paid, and they are laying in wait. They’re in homes, wherever they are, wherever they’re holed up, and they’re giving the go signal, and this stuff is then, with the aid of the media, it’s made to look spontaneous. That’s key. It’s made to look like these people were happy and fine and minding their own business until America became America again one day, when in fact this stuff is in the playbook, it is organized, it is programmed, it is paid for, and it’s very mobile.”

“It gives them a chance to point out how terrible President Donald Trump is for the country,” Chumley worte. “It gives them the opportunity to toss down race cards and advance their ‘cops hate the blacks!’ narratives — the narratives that then play so well with their fundraising efforts.”

It also helps get Joe Biden “some much-needed wind,” Chumley added “And who needs some wind for his campaign now but Joe Biden. Honestly, is there ever a time when you thought it feasible a presidential candidate would run for the high office from the safety and comfort and seclusion of his own basement?”

Chumley continued: “Enter thuggery in the streets, masked as care and concern and outrage and righteous anger over the police killing of George Floyd. Now Biden has got plenty of time to take a nap. The video cameras, the news crews, are all occupied with other things.

“Horrible as it seems, the violence across America right now is being used by the Democrats as a crisis that shouldn’t be put to waste. If it weren’t true, the Democrat leadership would rally together and make it stop.”

Democrats, Rush Limbaugh, the riots are being brought to you live by the Democratic Party, WorldTribune.com, yes