Significantly, the legislation would also repeal the Defense of Marriage Act, which defined marriage as a union between a man and woman. 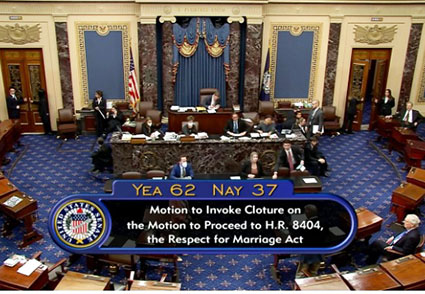 The act passed the Senate in 1996 by an 85-14 margin and was signed into law by President Bill Clinton, reflecting a national popular consensus. Court rulings later invalidated it amid concerted nationwide lobbying efforts.

Wednesday’s 62-37 vote would cement same-sex marriage rights into federal law with Democrats determined to get the legislation to Joe Biden’s desk in the coming weeks, the Wall Street Journal reported.

The Respect for Marriage Act, if signed into law, would codify the ability of same-sex as well as interracial couples to get married and require states to recognize the marriages, rights established in Supreme Court rulings. The bill needed 60 votes to proceed under Senate rules.

Romney said: “While I believe in traditional marriage, this legislation provides certainty to many LGBTQ Americans, and it signals that Congress — and I — esteem and love all of our fellow Americans equally.”

The proposal faces at least one more vote in the Senate and would need approval by the House by the end of the year to become law. The House is expected to pass it after approving a similar bill earlier this year.

A May poll by Gallup found that 71% of Americans say they support legal same-sex marriage, up from 27% in 1996 when the organization said it first surveyed Americans on the issue.

The legislation passed by the Senate on Wednesday “faces opposition from some conservative and religious groups,” the Journal noted.

In September, the Alliance Defending Freedom sent a letter signed by more than 2,000 churches and ministries to senators regarding parts of the legislation that they said could jeopardize religious freedoms.

The latest version says nonprofit religious groups won’t be compelled to participate in or support a same-sex marriage. Declining to do so wouldn’t put the group’s tax-exempt status at risk, lawmakers behind the measure said.

Utah Republican Sen. Mike Lee, who voted against the legislation, said the religious liberty protections were “severely anemic and largely illusory” despite the changes.

Roger Severino, vice president of domestic policy at the Heritage Foundation, said the legislation’s wording on tax-exempt status doesn’t provide affirmative protection that such a loss wouldn’t happen in the future.

“This bill puts a giant target on the back of individuals, nonprofit organizations, adoption agencies, schools, and businesses that hold fast to the truth about marriage,” he said.

Supreme Court Justice Clarence Thomas indicated, in his opinion concurring with the majority in the abortion case, that the court should review same-sex marriage rights down the road.

“No other justices said they shared the stance, but activists said lawmakers needed to move quickly to protect same-sex marriage while Democrats still had control of both houses of Congress and the White House,” the Journal noted.

Some Republican lawmakers have said same-sex marriage wasn’t at risk and the bill was unnecessary.

“I see no indication whatsoever that the United States Supreme Court is going to overturn the law, so what problem are we trying to solve here?” Louisiana Republican Sen. John Kennedy said on why he voted against it.

With midterms safely over, Senate moves fast to codify same-sex marriage added by Editor Two on November 17, 2022
View all posts by Editor Two →