Wisconsin issues subpoenas as ‘first step towards a full, cyber-forensic audit’ of 2020 election

The chair of the Wisconsin Assembly’s Elections Committee has issued subpoenas seeking 2020 election materials for Milwaukee and Brown counties.

State Rep. Janel Brandtjen said in a statement that she issued the subpoenas “as the first step towards a full, cyber-forensic audit of tabulators and inspection of the physical ballots from the November 2020 fall election.”

The subpoenas seek a wide scope of materials, stretching from the physical ballots themselves, to tabulation equipment and “forensic images” of election equipment.

OANN’s Christina Bobb reported on Friday that Brandtjen has “heard from many of her constituents and many people around Wisconsin saying that they want an audit and they want to see what’s happening in their elections here in Wisconsin … and so she issued those subpoenas, so it looks like we will see an audit. This is the same approach that Arizona took to subpoena the counties and ask them to turn over the information, and that happened this morning.”

Republicans have questioned why Milwaukee officials didn’t release results until the early morning after Election Day. They’ve also accused Green Bay Mayor Eric Genrich of ceding authority over the election to Facebook-funded consultant Michael Spitzer-Rubenstein, questioning why Genrich handed over keys to the city’s central ballot counting location to him.

“Wisconsin has just canceled 205,000 voter registrations because they say they could not find the voters,” former President Donald Trump said on Saturday.

“Why did they wait until AFTER the election? Would this mean that we would have won Wisconsin? Congratulations,” Trump added. 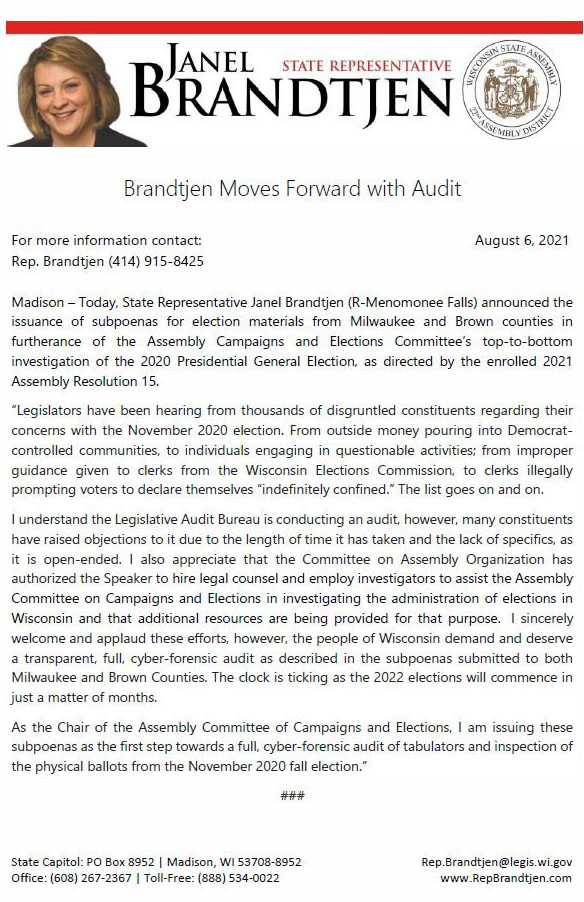