WikiLeaks founder: ‘If you act in corrupt ways that benefit Hillary Clinton’, she’ll take care of you

“It is important for there to be examples of accountability. The resignation (of Debbie Wasserman Schultz) was an example of that. Now, of course, Hillary Clinton has tried to immediately produce a counter-example by putting out a statement, within hours, saying that Debbie Wasserman Schultz is a great friend, and she’s incorporating her into her campaign, she’s going to be pushing for her re-election to the Congress. 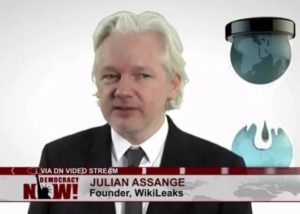 So that’s a very interesting signaling by Hillary Clinton that if you act in a corrupt way that benefits Hillary Clinton, you will be taken care of. Why does she need to put that out? Certainly, it’s not a signal that helps with the public at all. It’s not a signal that helps with unity at the DNC, at the convention. It’s a signal to Hillary Clinton partisans to keep on going on, you’ll be taken care of. But it’s a very destructive signal for a future presidency, because it’s — effectively, it’s expanding the Overton window of corruption. It doesn’t really matter what you do, how you behave; as long as that is going to benefit Hillary Clinton, you’ll be protected.

… The most significant ones (emails) haven’t been reported on, although The Washington Post late last night and McClatchy did a first initial stab at it. And this is the spreadsheets that we released covering the financial affairs of the DNC. Those are very rich documents. There’s one spreadsheet called “Spreadsheet of All Things,” and it includes all the major U.S. — all the major DNC donors, where the donations were brought in, who they are, identifiers, the total amounts they’ve donated, how much at a noted or particular event, whether that event was being pushed by the president or by someone else. That effectively maps out the influence structure in the United States for the Democratic Party, but more broadly, because the — with few exceptions, billionaires in the United States make sure they donate to both parties. That’s going to provide a scaffold for future investigative journalism about influence within the United States, in general.

… And it’s not just that the president holds fundraisers. That’s nothing new. But rather, what you get for each donation of a particular sort. There’s even a phrase used in one of the emails of, quote, “pay to play.” So, yeah, I think it’s extremely interesting. There’s emails back and forth also between the Hillary Clinton campaign and the DNC. So, you see quite elaborate structures of money being funneled to state Democratic Party officers and then teleported back, seemingly to get up certain stats, maybe to evade certain campaign funding restrictions.

In relation to what has become the most significant political discussion as a result of the publication, which is that the DNC higher-ups, including Debbie Wasserman Schultz, were clearly against Bernie Sanders and trying to subvert his campaign in a whole raft of ways, that’s true. That’s the — the atmosphere that is revealed by hundreds of emails is that it’s perfectly acceptable to produce trenchant internal criticisms of Bernie Sanders and discuss ways to undermine his campaign. So, whether that’s calling up the president of MSNBC — Debbie Wasserman Schultz called the president of MSNBC to haul Morning Joe into line, which it subsequently has done. I noticed this morning, Morning Joe actually discussed it themselves, trying to shore up their own presentation of, you know, a TV program that can’t be pushed around. But, in fact, they did not mention the call to the president. That was something that is still unspeakable. And it was a 180-degree flip in that coverage.

And you see other, you know, quite naked conspiracies against Bernie Sanders. While there’s been some discussion, for example, about — that there was a plan to use — to expose Bernie Sanders as an atheist, as opposed to being a religious Jew, and to use that against him in the South to undermine his support there. There was an instruction by the head of communications, Luis Miranda, to take an anti-Bernie Sanders story, that had appeared in the press, and spread that around without attribution, not leaving their fingerprints on it. And that was an instruction made to staff. So, it wasn’t just, you know, a plan that may or may not have been carried out. This was an instruction that was pushed to DNC staff to covertly get out into the media anti-Bernie Sanders stories.

… What’s not in that clip (where experts said Russia was responsible for the DNC leaks) there by Robby (Mook) is that, just afterwards, he was asked by Jake Tapper, “Who are these experts? Can you name them?” The answer was no, a refusal to name the experts. But we have seen one of the experts, so-called experts, that the Democratic Party is trying to base its incredible conspiracy theory on about WikiLeaks. And that is this — what we jokingly refer to as the NSA dick pic guy. He’s a former National Security Agency agent who started to produce conspiracy theories about us in 2013, when we were involved in the Edward Snowden rescue, as a means to try and undermine the Snowden publications, subsequently embroiled in some amateur pornography scandal. That’s why they don’t want to name their experts, because they are people like this.

In relation to sourcing, I can say some things. A, we never reveal our sources, obviously. That’s what we pride ourselves on. And we won’t in this case, either. But no one knows who our source is. It’s simply speculation. It’s, I think, interesting and acceptable to speculate who our sources are. But if we’re talking about the DNC, there’s lots of consultants that have access, lots of programmers. And the DNC has been hacked dozens and dozens of times. Even according to its own reports, it had been hacked extensively over the last few years. And the dates of the emails that we published are significantly after all, or all but one — it’s not clear — of the hacking allegations that the DNC says have occurred.”