Why the ‘ruling class’ hates Putin and Trump: They aren’t globalists

It is the biggest fake news story of our time. And it is being peddled by President Obama, the (politicized) CIA, the Democrats, establishment Republicans and the mainstream media, AKA, “the ruling class.”

What is it? That Russia — on the direct orders of strongman Vladimir Putin — hacked the DNC and John Podesta’s emails.

It’s a lie. Julian Assange, the founder of WikiLeaks that published the leaked emails, said in a recent interview to FOX News’ Sean Hannity that Russia had “nothing” to do with the hacking. Assange asserts that none of the emails came from the Kremlin or Russians associated with Putin’s regime. In other words, Obama and his media allies are fabricating the entire story. 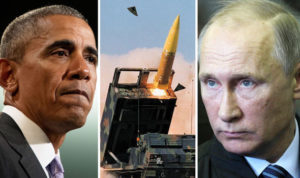 Why? According to Assange, their goal is to “delegitimize” President-elect Donald Trump. Having lost the election, Obama and the Democrats are desperately trying to paint Trump as illegitimate; the beneficiary of an election supposedly stolen by Putin in order to plant Moscow’s puppet in the White House. It’s a ridiculous conspiracy theory worthy of a Tom Clancy novel.

Related: What it took for the Democrat media to get serious about foreign intel threats, January 6, 2017.

There is no evidence — not even a scintilla — that one vote was switched from Hillary Clinton to Donald Trump. No voting machines were hacked that altered or changed any person’s vote to benefit Trump. In fact, when liberal activists demanded a recount in some states, such as Wisconsin and Michigan, Trump’s vote numbers increased.

Moreover, the bigger question is: Where’s the evidence? It’s time for Obama to fish or cut bait. If the evidence is as overwhelming as he claims, and it is the alleged “unanimous” opinion of all 17 intelligence agencies that Russia hacked the election, then it should be easy for Obama or the liberal media to publicly produce the intelligence reports and evidentiary proof. They won’t. And that’s because they can’t.

It is obvious that the hacked emails were from a disgruntled DNC staffer — probably a supporter of Bernie Sanders disgusted at how the Democratic establishment rigged the primary to ensure a Hillary victory.

Obama’s goal, however, is not simply to undermine Trump’s credibility before he enters the Oval Office. There is another sinister aim: To start a new Cold War with Russia.

The liberal media’s hysteria over Putin is reminiscent of the McCarthyism in the 1950s; the Kremlin’s tentacles allegedly stretch deep into American society. Aided by establishment Republicans, such as Sens. John McCain and Lindsey Graham, there is a growing call for more extensive, crippling sanctions against Russia — even direct confrontation.

America’s transnational elites despise Putin for one simple reason: He is not a globalist.

Liberals have no problem dealing with Islamist dictatorships, such as Iran or Turkey.

RINO Republicans, such as McCain and Graham, not only praise Saudi Arabia but are happy to take its money.

Hence, Russia’s problem is not its authoritarian regime. Rather, it is because Putin is a major obstacle to the relentless march of globalism.

Putin is an ethno-nationalist, who champions Orthodox Christianity and a resurgent Great Russia. He is opposed to the European Union and NATO enlargement. He seeks to defend vital Russian interests — whether in Syria, Crimea or Ukraine. In short, he is implacably opposed to liberalism’s holy trinity of open borders, mass immigration and multiculturalism.

Putin’s real sin is that he will not bow to the gods of the New World Order.

This is why Putin has become public enemy number one.

Our ruling class ultimately craves a Cold War 2.0. They want to permanently encircle Russia, eventually hoping to bring down Putin’s regime. Russia, however, is not our enemy but a natural ally, especially in the war against radical Islam.

Yet, to trigger a conflict with Russia the government-media complex must fabricate a casus belli — in this case, that Putin and Trump worked hand-in-hand to steal the election from Hillary. It is the greatest lie of our time, one that is almost straight from George Orwell’s 1984.

America should extend its hand to Putin, not slap him in the face. Hopefully, Trump’s presidency will change this.