Why Socialist America can happen; A closer look at Green New Deal

President Donald Trump said during his State of the Union address on Feb. 5 that America would “never be a socialist country.”

According to a Gallup poll from August 2018 Gallup, 57 percent of Democrats view socialism in a positive light, and 47 percent saw capitalism as a negative. 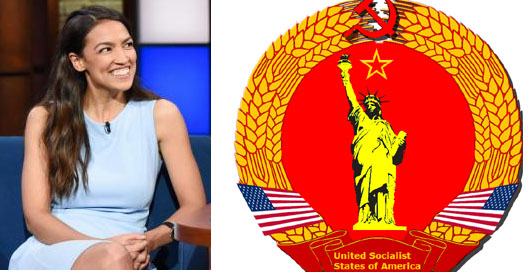 “For the first time in Gallup’s measurement over the past decade, Democrats have a more positive image of socialism than they do of capitalism,” Gallup said at the time.

A September 2018 BuzzFeed News and Maru/Blue online survey of 1,006 randomly selected 22- to 37-year-olds found 18 percent self-identified as a democratic socialist and 8 percent as a socialist, and 28 percent said they’d be either “much more likely” or “a little more likely” to vote for a socialist political candidate.

Writing for The Washington Times on Feb. 7, columnist Cheryl Chumley said Trump deserves “kudos … for standing strong against socialism. But he can’t do it alone.”

Only by acknowledging that America can become a socialist nation can Americans “protect against it,” Chumley wrote.

“How else to explain the rise of open socialists in Congress – the embrace of socialism among millennials – the growing acceptance of this form of government as an alternative to America’s democratic-republic? These things do not happen in a bubble. They’re warnings of where America is headed.”

Many observers pointed to Rep. Alexandria Ocasio-Cortez’s Green New Deal (GND) as one of those warnings – a big one.

The deal’s authors say it requires a “massive transformation of our society” and also needs some “clear goals and a timeline.” That timeline is reportedly ten years.

David Harsanyi, a senior editor at The Federalist, noted some of the goals of the socialist Democrat’s proposal:

Ocasio-Cortez and the GND’s Senate champion, Massachusetts Democrat Ed Markey “claim that 92 percent of Democrats and 64 percent of Republicans support the Green New Deal. I’m not sure where that number is derived. But ask them again when government agents come to take out their water heater,” Harsanyi wrote.

Chumley wrote that “It’s going to take a strong border and committed citizenry to keep this country on a constitutional track. America is only one generation away from socialism. And if truth be told, if these polls and surveys and political trends are taken with the seriousness they deserve, socialism in its softest form – the smiley-face giveaways, the social justice bumper stickers – is already here.

“Take heed: When the money runs out, it’s always the fisted, forced and enforced version that comes next.”